Edit
watch 02:46
The Quarry - The Loop
Do you like this video?
Play Sound
"Anyone else heard the guy inside here? 'Probes under attack.' I swear I've heard him say that..."

The nexus (plural nexi,[1] nexus, or nexuses[2]) is the heart of a protoss base.

"Also, I've never heard of snipers, so I stand near windows: the only weak point in this whole building!"

The nexus is a mammoth, pyramidal structure that looms over each and every protoss settlement. It serves as a psychic anchor, allowing the protoss to access the psionic matrix from even across the galaxy.[3] Technological advancements made after the Brood War have enabled nexi to manipulate space and time itself.[1] The nexus also manufactures probes[3] and has a processing center for minerals and vespene gas.[4]

Khaydarin crystals are located within each nexus. They can be used as a defensive measure when the psionic matrix is supercharged by a mothership core. In turn, each nexus is linked to these cores through its khaydarin crystals, and can serve as a warp beacon to initiate recall.[5] After being refitted by numerous phase-smiths in the wake of the Brood War,[1] nexii were given the ability to produce a burst of energy that creates a chronal distortion field, briefly accelerating the production of a single structure.[4]

The nexus has windows, which can be penetrated by a C-10 rifle round.[6]

Long ago, the Tal'darim adapted a captured Khalai nexus to maximize its architectural brutality, with a supercharged khaydarin crystal restrained by psionic prongs at its peak. The Ihan-rii meanwhile are very secretive regarding their nexii, though from the outside distant heartbeat sounds and strange undulations can be heard.[1]

The nexus serves as the hub of any protoss base. Unlike most other protoss buildings it can be warped in without a pylon. It constructs probes and serves as a processing center for minerals and vespene gas.

In StarCraft: Remastered, an "Aiur nexus" skin is available for those who pre-ordered the game.[7]

In the StarCraft beta, the stargate was originally known as the nexus.[8]

The nexus was set to appear in StarCraft: Ghost.[9]

Mastery: +20 sp per Structure Health and Shield mastery point. Up to a maximum 1600 (Co-op Karax)

Mastery: +20 hp per Structure Health and Shield mastery point. Up to a maximum 1600 (Co-op Karax)

The nexus remains much the same in terms of cost, appearance and function in StarCraft II. The protoss core macromanagement ability has been moved here.[10]

Chrono Boost gives the player the choice of affecting the nexus, gateway, stargate, robotics facility or boosting upgrades at other structures—almost any building in the protoss base can be an option.

In Patch 4.0, the nexus was given the mass recall ability, allowing it to teleport all of the players unit to a target nexus. This ability has a global 130 second cooldown across all nexii. With Patch 4.12, an additional Battery Overcharge ability was added, allowing a shield battery nearby a nexus to increase their shield restoration rate without using energy for 14 seconds, with a 60 second cooldown global to all nexii.

This ability increases the production speed of a structure by 50% for 20 seconds.

It has no effect on allied buildings and cannot be used on incomplete buildings.

Recalls all allied units in the target area (2.5 radius) to the Nexus.

The cooldown for this ability is global for all Nexuses. Does not share a cooldown with the mothership Strategic Recall ability.

Overcharges a target Shield Battery near a Nexus, increasing its shield restoration rate by 100% and allowing it to restore shields without consuming energy for 14 seconds.

In Heart of the Swarm, the mothership core uses this ability on a nexus, which gains a photon cannon-like weapon. The weapon has range 13, targets air and ground and deals 20 damage. The weapon lasts 60 seconds and has its own cooldown of 1.25.

Teleports all units in an area 7[13] from a mothership core or mothership to a nexus. The ability is cast through a simple button click on a nexus.

Artanis, Vorazun, Karax, Alarak and Fenix use nexus with primary structure. Unlike multiplayer nexus uses Chrono Boost as in the Legacy of the Void campaign. Zeratul use Ancient nexus.

Architect of War: Chrono Boost can be used on defensive structures, increasing their attack speed.

The nexus went through many small changes. As a primary structure, the scale was adjusted often, specifically the pyramid shape in the middle. The only significant overhaul was done with the intention of increasing the polycount on the curved surfaces around the structure.[15]

The chrono boost ability was briefly removed during the beta of Legacy of the Void.[11]

The nexus will undergo a redesign in an upcoming patch to account for the removal of the mothership core. Its chrono boost ability will be redesigned, it will gain the mass recall ability, and gain a shield boost ability. It will start with 50 energy as opposed to the current 0.[16]

The nexus in StarCraft: Ghost

The nexus in StarCraft: Remastered 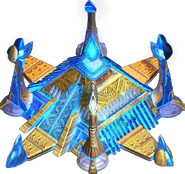