Nuura Joss is a terran outlaw and member of the War Pigs.

Joss is trained in hand-to-hand, knife and firearm combat. Unlike the other War Pigs, she has been trained to follow orders. She was considered a valuable team member due to her ability to pilot warp travel-capable vessels.[2]

Joss used to be friends with Rolly Gibbons, owner of the Apollo Shipyard. She and Gibbons used to help each other out in scrapes in the "old days".[3]

In 2496 Agent Nuura Joss worked as a bodyguard for Confederate Senator Canon, who was determined to end corruption in the Confederacy. Joss fell in love with him.

Joss defended him from a Korhalian dissident at Brontes, who tried to kill Canon, believing him responsible for the destruction of his world. Joss' reactions were slowed by her recent lack of professionalism, but she was still able to gun him down.

Shortly after the two made love, Joss tried to get herself reassigned, since she believed her relationship with Canon made her an inadequate protector. She was ambushed by a ghost, who knocked her out and framed her for Canon's murder.

Joss fled, but later turned herself in. She plead guilty to treason and was sentenced to life. However, the media reported her "crime" as a crime of passion.

Most of her Special Services colleagues believed the story, but her friend Marcus did not.

Leonid Celsus of the Center for State Security was pleased by this turn of events, believing he could manipulate her in a year or two of her reflection of spending the rest of her life in prison.[4]

The next year,[2] Joss became part of the War Pigs, a band of outlaws recruited from the "prison herd" and turned into disposable soldiers.[5]

In early 2499, Tamsen Cauley dispatched Joss to work on the General Lee, an old warp-capable vessel. She spent three weeks on it ensuring it was fully functional and had already become quite defensive about it. When the rest of the War Pigs came to see it, some of the others (especially Iggins) mocked it for being old, prompting Joss to threaten death for anyone who put the ship down. They traveled to the Hephaestus, site of secret Megamedes Project data the War Pigs were ordered to recover, along with something else.

Joss remained aboard the General Lee as the other War Pigs got aboard the Hephaestus. During their escapade, she warned them the Hephaestus was going to fall out of orbit. The War Pigs (except one) made it off safely.[2]

In February 2500 Nuura Joss took part in the failed assassination attempt on Arcturus Mengsk at the behest of the War Pigs' handler, Tamsen Cauley. As they fled the zerg who had interfered in their mission, they ran into a Confederate blockade; she made the General Lee jump into warp space in order to avoid them.[6]

On the run, the group was lured into an ambush by Cauley's Cerberus Program, but the War Pigs escaped. They then split up, agreeing not to meet each other again.[5]

In 2502 however, the War Pigs were brought back together for one final mission–the assassination of Jim Raynor.[7]

Nuura Joss took part in a mission on Moria, collecting information on Raynor. She drove a vulture, leaving the General Lee in the hands of Romy Pyrius. The mission was a disaster, as the Kel-Morian Combine responded to their questions with gunfire and rockets, and Cole Hickson was suffering from a lack of focus. In order to escape Kel-Morian vultures, Joss threw an explosive at a vespene gas fumarole. However, she had to come to the rescue again to protect the grounded General Lee from Banshees, which she did once she got inside, firing the weapons.

The General Lee was too damaged to safely jump into warp space, so Joss suggested meeting with her trusted friend Rolly Gibbons at the Apollo Shipyard. She also discussed her suspicions about Hickson with Turfa Dei. The trip to the Apollo Shipyard turned out badly, as it had been taken over by the Screaming Skulls, a band of pirates, who captured four of the War Pigs; except Romy Pyrius, who was doing stims. The War Pigs escaped when Pyrius created a distraction, enabling Joss to don a space-going suit and shoot out a window in the shipyard, killing the leading pirates through vacuum exposure.[3]

Romy Pyrius smuggled a xel'naga artifact aboard the General Lee, and its "soul" had a negative influence on the human minds aboard the ship. Joss effectively sealed herself into the cockpit, avoiding most of the chaos sparked by the artifact. She noticed a break-in when a trio of Dark Templar sneaked into the cargo hold to retrieve the artifact. The Dark Templar warned the War Pigs not to harm Jim Raynor before vanishing with the artifact.[8]

In August, Turfa Dei picked up a transmission from his hometown of Hudderstown Colony, Agria. The residents had suffered a massacre and desperately called for help. The War Pigs went to rescue them. Upon discovering the scene of carnage, Hickson callously disregarded it, wanting to get on with the search for Raynor before their time ran out. Joss berated him for his attitude, and with the support of the rest of the War Pigs, kept the General Lee nearby to assist Dei.[1]

The War Pigs tracked Jim Raynor to Urona Sigma due to Hickson's research. As the General Lee kept watch, Joss observed Hickson acting strangely, such as not sleeping for three days straight, spending most of the time tinkering with his armor. A trio of Raynor's Raiders dropships flew by, and Joss tracked them down to the northeast of the planet. However, the dropships disappeared.

While the rest of the team accompanied Hickson to the surface, Joss contacted Marcus, an old friend of hers at Special Services. As the War Pigs got themselves captured by Raynor's Raiders, Marcus revealed the truth to Joss: Tamsen Cauley had implanted a subconscious form of neural resocialization into Hickson, explaining his odd behavior. He was programmed to kill Raynor and the War Pigs. Raynor trusted Hickson, leaving himself open to Hickson making a move. As Joss tried to warn the War Pigs, Cerberus Program commander Lars Trakken used his cloaked Wraith to attack the General Lee.[4]

Trakken and his Cerberus Program heavies boarded the General Lee, intending on killing Joss. However, Joss was able to elude the resocialized troops and escape in an escape pod, vowing revenge on Trakken and promising to take her ship back.

Joss emerged during a confrontation between the War Pigs, Cole Hickson, and Jim Raynor; Hickson was pointing his pistol at Raynor's face. Joss pointed her rifle at Hickson's head, but Raynor told her to hold her fire as he talked Hickson into resisting his resocialization. As Hickson fell screaming to the ground, Raynor warned the War Pigs that the protoss had begun bombarding the planet.[9]

Trakken descended with a dropship and a squad of Cerberus troops in order to personally see Hickson's death. Joss called for an ammo count; the War Pigs didn't have enough to resist. She pointed out Trakken's hatred for Hickson, which Raynor decided to use as part of a ruse to defeat the squad and steal the dropship. The trick was a success; Trakken was killed but so was Romy Pyrius. The surviving War Pigs and Raynor took the dropship away and took shelter in the General Lee. Hickson swore revenge on Tamsen Cauley for his role in Pyrius' death, and the War Pigs plotted a "suicidal" attack on Cauley as a result.[10]

According to preview information, Nuura Joss is 31 years old, 1.80 m (5'11") tall and weighs 82 kg (180 pounds). Designated as a light infantry soldier who wears "next generation" CMC Light Combat Armor, Joss is capable of flying light cruisers and other transport craft. She is also a sniper/sharpshooter.[11] 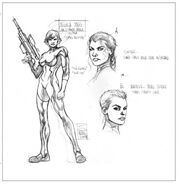 Nuura Joss concept art
Add a photo to this gallery

Retrieved from "https://starcraft.fandom.com/wiki/Nuura_Joss?oldid=289661"
Community content is available under CC-BY-SA unless otherwise noted.