Edit
watch 02:46
The Quarry - The Loop
Do you like this video?
Play Sound
"Dimensional strings attuned."

300
The oracle is designed for reconnaissance, harassment and economic disruption.[8] It allows protoss players the option of more aggressive raiding tactics than in previous games.[9]

Oracles are exclusive to Vorazun in Co-op Missions. Because she cannot build observers, her oracles permanently act as detectors without needing to use Revelation. Unlike in multiplayer, their attack has no activation cost and its damage is increased with the air attack upgrade.

Places a cloaked Stasis ward at the target location. Once activated by an enemy ground unit, the ward traps nearby enemies in stasis for 15 seconds. Trapped units cannot be attacked or affected by abilities.

Withering Siphon: Reduces stasis duration by 75%. Stasis wards affect Heroic units and cause enemy units to lose 20 hit points per second, up to a maximum of 80. This effect cannot kill. 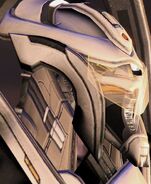