Start a Wiki
watch 02:27
The Loop (Games)
Do you like this video?
"Whoa! Careful of those protoss cannons! They can detect banshees even when they're cloaked!"

The photon cannon is an automated, all-purpose[1] defense structure of protoss design.

"Did this thing just demote me to bullet catcher?"

Photon cannons require a link to the psionic matrix generated by pylons. Although the protoss revel in the glory of personal combat, they also recognize the need for automated defenses. As such, the cannon fires an encapsulated antimatter sphere similar to that generated by the dragoon, which can target air and ground targets.[2] Inexpensive and easy to deploy, photon cannons are often installed at the entrances to protoss encampments, or overlooking psi-powered checkpoints. Photon cannons aren't rapid-fire weapons, so they're not as effective against massed foes. A marine rifle company or a pack of zerglings can easily work its way through a protoss station, picking off cannons one by one.

Photon cannons are equipped with special sensor technology borrowed from the observer. They are capable of spotting cloaked or burrowed enemies at a wide range.[1]

Experiments were done with integrating photon cannons with warp technology, however these experiments widely ended in failure.

Tal'darim are known for secretly constructing cannons behind the mining operations of the enemies.[3]

This unit may detect cloaked and burrowed enemies.

During the StarCraft alpha, the photon cannon was known as the "photon battery."[4]

The photon cannon re-appears in StarCraft II, much the same as its predecessor.

All protoss commanders are able to construct photon cannons in Co-op Missions. Karax is able to upgrade his photon cannons upon reaching level 6 and warp them in instantly once he reaches Level 11. Zeratul gains a variant named the tesseract cannon.

Increases the attack rate of photon cannons and khaydarin monoliths by 25%.

The photon cannon initially structuraly resembled its predecessor, retaining its 'telescope'.[5] It was replaced by the phase cannon early in the development of StarCraft II.[6] It has since returned in name and ability, although uses the phase cannon's model.[5] 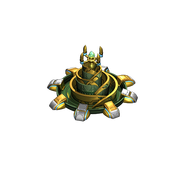 The photon cannon in StarCraft: Remastered. 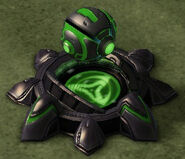 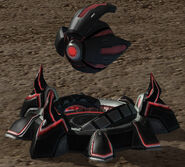 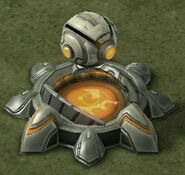 Purifier photon cannon.
Add a photo to this gallery

Retrieved from "https://starcraft.fandom.com/wiki/Photon_cannon?oldid=346499"
Community content is available under CC-BY-SA unless otherwise noted.