Primal roaches are primal zerg creatures based off the Zerg Swarm's roach strain.

Primal roaches were one of the first Zerg Swarm strains whose essences were stolen by the primals shortly after the Swarm landed on Zerus.[1][2] They were later mutated by the chaotic essences of the primals to have the ability to evolve into primal igniters and primal guardians.[3]

Primal roaches are similar in basic appearance to normal roaches, though they have different colors, have a slightly more bulbous carapace, and possess larger claws. They also have more health than normal roaches in the campaign.

Primal roaches appear as enemies on Zerus.[4] They later appear as part of Dehaka's pack after Kerrigan's rebirth and also during her attack on Korhal.[5]

Kerrigan, in her Primal Queen of Blades form, can summon sacs containing a group of primal zerg consisting of primal zerglings, primal hydralisks, and primal roaches. These units have a timed life and do not have any of the benefits normal roaches gain from the evolution pit.[6]


The rate of healing increases with the Tunneling Claws upgrade to a rate of 10 hit points per second.[7]


The regeneration doesn't stack with the medivac dropship's healing ability.[8]

Primal roaches can be constructed by Dehaka in Co-op Missions. They regenerate health quickly while burrowed, and can mutate into a primal igniter or primal guardian.[9]

Increases the movement speed of primal roaches by 31% and primal igniters by 19%. 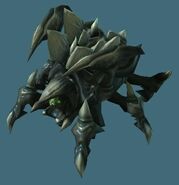 Retrieved from "https://starcraft.fandom.com/wiki/Primal_roach?oldid=330757"
Community content is available under CC-BY-SA unless otherwise noted.