Start a Wiki
watch 02:17
The Loop (Games)
Do you like this video?
"For StarCraft II, we were thinking of trying some new looks for some of our basic protoss, zerg and terran units. So we had the idea of making the prison infantry guard - AKA the PIGs - be your basic line of troops. And basically these guys were just convincts that had been resocialized and geared up in the cheapest armor and thrown on the frontline. Why waste marines when you have prisoners?"

Prison infantry guards (or PIGs) was a proposed terran infantry unit for StarCraft II: Wings of Liberty. They were resocialized prisoners for the Terran Dominion, given cheap armor and weapons, and sent to the frontlines as a means to supplement marine ranks.

PIGs were a proposed alternative to the marine as the basic terran frontline infantry. They used heavy weapons and shields, and were outfitted with cybernetics. However, design for PIGs did not make it past the concept stage.[1]

The concept of lightly armored marine alternatives were later realized in the trooper, although they had a different appearance. 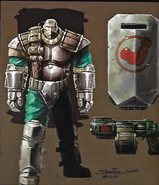 Retrieved from "https://starcraft.fandom.com/wiki/Prison_infantry_guard?oldid=340828"
Community content is available under CC-BY-SA unless otherwise noted.