Edit
watch 02:34
Fire Emblem Warriors: Three Hopes - The Loop
Do you like this video?
Play Sound
"They fire bile from their backs. I say that counts as poop. Silva says it's puke. The debate rages on."

The ravager is a zerg artillery unit evolved from the roach, introduced in Legacy of the Void.

"Now they're sending ravagers our way. Watch out for their corrosive bile."

In use by 2505[1], the ravager is the result of years of twisting and fine-tuning the genome of the roach far beyond its biological limitations[2]. Ravagers stand two to four times as tall as a terran wearing CMC armor, and hardened bone spikes portrude from their backs. Their eyes grant them a broad spectrum of vision[1]. Generating ravagers require dark, humid conditions.[3]

The ravager wields plasma fire both in close-quarters combat and as a wedge to crack open entrenched positions, something the Swarm has struggled with in the past[2]. As an evolution of the roach, the ravager developed a larger[4], heavier[2] frame to store quantities of fiery fluid in its back[4]. The ravager can launch a gob of corrosive bile from its back in a parabolic arc. This projectile is slow, best used against stationary targets, but can destroy protoss force fields[4], and is effective against heavy units and structures. The Dominion has theorized that this ability was developed to boost the ravager's utility in assaulting entrenched positions. This mortar-like ability is slow moving however, and ground forces can move out of the way in time.[1]

Occasionally the ravager's exoskeleton would calcify, allowing for more durable armor. Abathur considered the resulting intimidation factor of such armor to be an added bonus. Leviathan Brood ravagers have an even more monstrous appearance than standard ravagers, with spikes jutting out from their bodies (as is normal within the brood).

The primal zerg have adapted a species of ravager known for being brutal and bloodthirsty, known for eating their own young should they not be strong enough to fight back. This nature has put the survival of their strain into question.

Ravagers enslaved by the Cerberus Program were enhanced with plasma spines that superheated the corrosive bile as it was launched.[3]

Brutalisk (Co-op Missions)
Ravagers do more damage than roaches. However, their effectiveness heavily relies on player micro due to their corrosive bile ability[5]. Ravagers corrosive bile hits from a long range, and impacts units in a small area around the target a few seconds after launching. Bile will hit both ground and air units in the target area. Corrosive bile also destroys the Force Fields of the sentry.

Ravagers are effective against key units that are otherwise difficult for the Zerg to deal with such as siege tanks, liberators, and deployed warp prisms. However they are relatively cost inefficient and can be dealt with using immortals or marauders with proper micromanagement to avoid corrosive bile. Ravagers have no Light or Armored attribute tag, and thus do not take bonus damage for their armor type, but still do best with zerglings and roaches in front to absorb enemy damage while they dish it out.

Launches a glob of bile into the air that descends on target point after 2 seconds, dealing 50 damage to enemies in an area of effect. Hits both air and ground units, destroys force fields.

Abathur is able to mutate his roaches into ravagers in Co-op Missions. Additional upgrades for them unlock at the roach warren once Abathur reaches Level 4. Biomass decreases the cooldown of the ravager's corrosive bile ability, 0.5% per biomass collected up to 50% at 100 biomass.

Stetmann has access to mecha ravagers, which are temporarily spawned from mecha infestors.

Launch a missile at the target location, dealing 60 damage to all units in the area upon impact. Can destroy Protoss Force Fields.

The Ravager evolves into a Brutalisk. Can be set to autocast.

The Limitless: Evolve to Brutalisk is no longer limited to 3, but requires 200 stacks of Biomass.

When killed, your units have a 50% chance to drop all their Biomass.

Essence Hoarder: Increases the Biomass Recovery chance from 50% to 100%.

Increases the damage done by Corrosive Bile by 40.

Increases the radius of Corrosive Bile by 200%.

An upgrade existed[6] that allowed the range of corrosive bile to be increased to 13. It cost 100 minerals and vespene gas. This required a lair.[7] 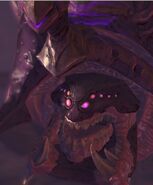