Start a Wiki
watch 02:38
The Loop (Games)
Do you like this video?
"Ravasaur. Fights with acid. Bring it down, quickly."

The ravasaur is a primal zerg lifeform that attacks with acid spit, which they generate through parotid glands.[1]

Can attack air units only in campaign.

Ravasaurs appear as enemies on Zerus in the Heart of the Swarm mission Supreme. After Sarah Kerrigan defeats Yagdra and Kraith she will have to use leaping strike to get on a platform to gather the fourth xel'naga relic. On the first platform a player can see a ravasaur.

Kerrigan can again encounter a ravasaur when she covers the final distance to kill Slivan. Five or six of them stand on high ground where Kerrigan can't reach them. She will have to use leaping strike to get to them and take them out, otherwise her primal zerg army will only come to the other side damaged.

Ravasaurs are available to Dehaka in Co-op Missions. They are evolved from primal zerglings.[2] A percentage of damage dealt heals the ravasaur.[3]

Increases the attack range of Ravasaurs by 1 and movement speed by 0.75.

The unit will leech 20% of damage done as life. 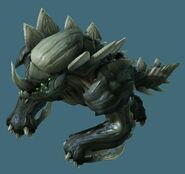 Retrieved from "https://starcraft.fandom.com/wiki/Ravasaur?oldid=330756"
Community content is available under CC-BY-SA unless otherwise noted.