Start a Wiki
watch 02:17
The Loop (Games)
Do you like this video?
"Hell, cowboy, we gotta train more of these guys, they're seriously bad ass!"

The reaper is a terran jet-pack equipped infantry unit introduced in StarCraft II.[1]

Operating in squads,[2] reapers specialize in hit-and-run, close-quarters combat.[3] Classified as foundational units for terran forces,[4] they are more mobile than marines as their jet packs allow them to surmount obstacles independently.[3] Originally these jet packs (alternatively referred to as "jump packs") were capable of full flight. Crashes and fatalities were common among new "recruits" as the unwieldy booster proved difficult to control. The hardware was also known to randomly explode due to poor distribution of fuel lines and air intakes, leading to a complete overhaul. Prototypes of a flightless, twin-turbine jump pack surfaced soon after—which gave reapers enough mobility to carry out their missions and return to base in one piece.[2] However, by 2511 Dominion reapers were once again given fully flight capable jetpacks, as more advanced suit designs and better training routines prevented many of these crashes.[5]

Reapers are clad in self-contained body suits[3] and wear polarized plasteel flight goggles.[2] They are armed with either dual P-38[1] or P-45 pistols. Many reapers also use Deuterium-eight demolition charges despite the Dominion Armed Forces' efforts to curtail their usage. Combat drugs can be administered to reapers within the field.[2]

Dominion reapers consisted of individuals that are resistant to neural resocialization—pirates, petty crooks, murderers, the occasional political dissident,[6] and marine recruits that remain unmanageable after being subjected to resoc. These resistant recruits tended to be among the most hardened of criminals, and were sent instead to the "Icehouse" in the Torus system to be inducted into the Dominion Reaper Corps. Reaper recruits were chemically altered to make them even more aggressive before being subjected to brutal training in close-quarters combat and the use of their jet packs.[3]

Reapers were obligated to serve two years before being discharged. In the first five years the Reaper Corps failed to have a single recruit complete more than six months of service.[3][7] However, some reapers were allowed to leave the program for reasons such as injury.[7]

Upon coming to the throne, Valerian Mengsk re-organized the Reaper Corps, giving its members better, more humane training.[5] He did away with the requirement to use dangerous stimulants, and focused recruiting on finding candidates who were naturally unpredictable. Reapers could also be found among private militias within the Dominion, such as the Knights of Tyrador.[8]

Other terran factions that utilize Reapers include Raynor's Raiders,[9] Tosh's Goons,[10] Moebius Corps,[11] the Defenders of Man,[12] Mira's Marauders,[13] the Umojan Protectorate (which have their own Reaper Corps)[8] and renegade units.[3] Mira's Marauders make use of a particularly large number of reapers, who modify their armor with scrap metals, and are particularly famous for their armor's distinctive metal mohawks.[8]

D-9 Charge (Co-op only use vs structures)

Reapers can leap up and down a single elevation

Reapers can leap up and down ledges (only one tier, however) without the need of a spotter or medivac dropship. This ability makes reapers ideal for scouting and hit-and-run attacks. They cannot leap over obstacles or Force Fields, however.

It does bonus damage against light units. It is strong against zealots, zerglings, and workers with a little maneuvering,.[14]

In early game raids, reapers work well in trios. A trio of shots can take out a drone in a single round of firing for instance.[17]

The reaper is not quite as fast as the hellion, but can often get to certain areas faster due to its cliff-jumping capability. Reapers do more targeted damage to light-armored units such as workers but hellions can injure several simultaneously and with the Infernal Pre-Lighter upgrade are capable of dealing greater amounts of damage. However, reapers attack more than twice as fast as hellions do. They have different armor qualities as well, which can factor into the decision as to which raider to use.[18]

In Legacy of the Void, reapers gained a grenade ability. Here, the reaper launches a grenade that deals damage and knockback.[19]

Reapers heal for 2.8 HP every second if the Reaper is not attacked for 7 seconds.

Explodes after a short delay, dealing 5 damage and knocking back nearby units.

Reapers are unlocked by playing the mission "The Devil's Playground," available after Gabriel Tosh gave some of them to Raynor's Raiders.[10]

U-238 Rounds are made from depleted uranium. These rounds are extremely dense (1.67 times the density of lead), so they have increased range and hit lightly armored units much harder.[20]

Armor upgrades increase health of affected units by 5% per level.[21]

This anti-personnel charge detonates shortly after being thrown. The initial blast ejects a cluster of smaller charges that deal additional damage in a large radius.

Please note that Enlightened Dynamics assumes no liability for deaths due to friendly fire.

Reapers can be built by Mira Han in Co-op Missions. They can be upgraded to engage air units by flying upwards with their jetpacks.[13]

Reapers heal 2 HP every second when in out of combat for 10 seconds.

Explodes after a short delay, dealing 10 damage and knocking back nearby units. Can be set to autocast.

Reduces the cooldown of Reapers KD8 Charge by 10. When Reapers are killed, they throw 8 grenades (1 under him and 7 around him) the killing unit.

Increases the movement speed of Reapers, and grants them the ability to fly for 10 seconds. Reapers are able to attack air units while flying.

In Nova Covert Ops, reapers can equip one of various provided upgrades and abilities for each mission.

Increases unit's attack and movement speeds by 50% for 15 seconds and heals unit for 30 HP. Can be set to autocast.

The reaper can deploy a spider mine at target location. Reapers can carry up to three mines.

Equips reapers with D8 charges, increasing the damage they deal when attacking structures.

These reapers "washed out" during training: 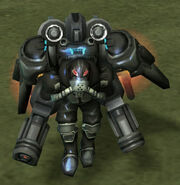 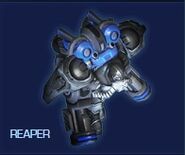 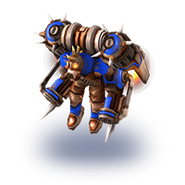 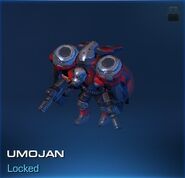 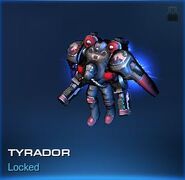 Tyrador reaper
Add a photo to this gallery

Tyrador reaper portrait
Add a photo to this gallery

Retrieved from "https://starcraft.fandom.com/wiki/Reaper?oldid=351692"
Community content is available under CC-BY-SA unless otherwise noted.