The robotics bay is a protoss structure in StarCraft II.

The robotics bay serves as the primary research and development facility of the khalai's foremost phase-smiths. Tal'darim robotics bays utilize terrazine in their design.[1]

In July 2007, it was a requirement for the reaver and the observer.[4]

Doubles the amount of damage the immortal's Barrier can absorb.

Doubles the number of scarabs a reaver can store.

Increases the splash radius of the reaver's attack by 25%.

Reduces the charge time of the wrathwalker's attacks by 2 and decreases attack cooldown by 0.5.

Increases the damage Vanguards deal to armored units by 7.

Increases the splash radius of the vanguard's attack by 50%.

Taldarin's attacks store 25% of the damage dealt on the target. When that unit is killed, it explodes, dealing all of the stored damage to nearby enemies.

Tactical Data Web: increases the store damage by 10% per immortal, from 25% to a maximum 75%

Warbringer fires a devastating blast that deals 300 damage to the target unit.

Tactical Data Web: decreases the cooldown by 1.5 seconds per colossus, from 10 to a minimum of 5. 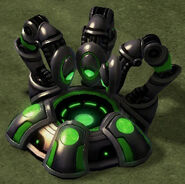 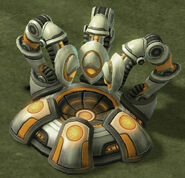 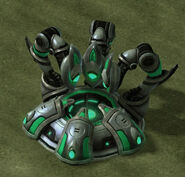 Xel'naga constructs bay
Add a photo to this gallery

Retrieved from "https://starcraft.fandom.com/wiki/Robotics_bay?oldid=347195"
Community content is available under CC-BY-SA unless otherwise noted.