The robotics facility is an advanced protoss structure.

The robotis facility transports[1] and manufactures automated war machines to battlefields to support protoss forces. Its capabilities are expanded by other structures such as the robotics support bay.[2] Each is controlled by a highly trained Master of Robotics as well as dozens of protoss engineers. The platform of the structure is designed to warp in and maintain massive units. When a warp sequence is activated, the structure reconfigures itself.[1]

The robotics facility creates robotic units like the shuttle, observer and reaver.

Mastery: +9 sp per Structure Health and Shield mastery point. Up to a maximum 720 (Co-op Karax)

Mastery: +9 hp per Structure Health and Shield mastery point. Up to a maximum 720 (Co-op Karax)

The robotics facility creates robotic units like the colossus, observer and warp prism, as well as the immortal.

Allows Artanis to warp in reavers from the robotics facility. Requires a robotics bay

Robotic Disruption Unit. Can use Purification Nova to deal heavy area damage. Warped in at the Robotics Facility.

During the StarCraft beta, the robotics facility had a different appearance. Its final model was re-used from a canceled structure known as the maintenance bay.[4]

In the course of updating the robotics facility's design, it was decided to alter the shapes so that different animations occurred depending on the unit being produced.[5] 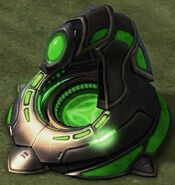 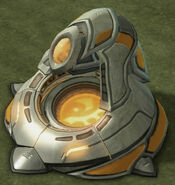 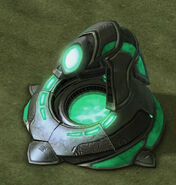