20 (equal to unit being repaired)

50
The SCV reappears in StarCraft II.

Five SCVs can be held at a time in a command center or planetary fortress (upgraded to ten with Neosteel Frame).

SCVs can patrol, a very useful ability considering they can auto-cast repair. While multiple SCVs are able to simultaneously repair a unit/structure, only one SCV can construct a structure at a time due to reasons of balance. SCVs may repair any allied unit that is considered mechanical regardless if it is terran or protoss, but they can only repair terran structures. It is the only terran multiplayer unit without a ranged attack.

The SCV builds structures and harvests minerals and vespene gas. Idle SCVs can be selected by pressing F1.

Restores the hit points of a mechanical unit or building, terran or protoss. Repairing costs resources.

The command center or planetary fortress may load and unload five SCV's. This may be done while a command center is in flight. The number of SCV's is increased to ten with Neosteel Frames.

Applies your currently selected spray or decal to the terrain at the target location. Creates one charge every three minutes and 34 seconds for a maximum of five charges. Each player may have only five sprays on the map at a time.

In StarCraft II: Wings of Liberty, SCVs appear from the second mission, "The Outlaws," Raynor's Raiders already having access to them. Later in the campaign SCVs can be built in pairs if the upgrade "Command Center Reactor" is researched in the Lab 01.

This revolutionary computer allows multiple SCVs to work on the same structure simultaneously. The onboard assistant is so efficient at coordinating SCV efforts that building costs are unaffected. This upgrade is vital when trying to get a base up and running quickly, or when trying to rebuild a broken defense.[1]

The SCV's ability to get damaged mechanical units back to full life, and even to repair units while they are taking damage, has been a key advantage over the protoss and the zerg. The Dual-Fusion Welder allows SCVs to repair at twice the speed, improving their ability to keep damaged units alive in the heat of battle.

We can now call down supply depots straight from orbit due to our new understanding of protoss architecture. Key point joints have been added to the supply depot's structure, allowing the supply depot to survive the violent turbulence of breaking through an atmosphere. Now an SCV simply has to place a beacon, and the crew on the Hyperion will handle the rest. [2]

Damaged mechanical units recover hit points when out of combat, at a rate of 0.6015 each second.[3]

Armor upgrades increase health of affected units by 5% per level.[2]

All terran commanders, except Mengsk, use SCVs as basic workers. Rory Swann's SCVs are built faster and get upgraded with Advanced Construction at level 8. Alexei Stukov can create Infested SCVs. Mengsk uses Dominion Laborers instead of SCVs.

Advanced Construction: SCV's repairs do not have a resource cost.

Swann builds SCV, vehicles and starships 20% faster than other Commanders. Factories and armories do not cost vespene gas.

Multiple SCVs can build a structure, reducing its construction time by 60% per additional SCV. Repair has no resource cost.

Han and Horner Upgrades and Abilities[]

Increases the armor of Tychus and his Outlaws and increases their life by 10%.

SCVs have unused death screams[4] and unit quotes.[5] Early versions of the SCV had a blue exhaust instead of the current orange. This was not correspondent with the player's color.[6] 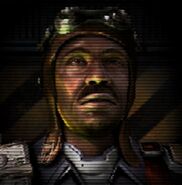