The sentry is a protoss support unit introduced in StarCraft II available early in the game. It was known as the nullifier[1] and then as the disruptor during development.[2]

Used to support zealots[3] in light of the protoss race's diminishing population, sentries are protoss combat drones.[4] Sentries employ a disruption beam to attack their enemies, and offer protection through guardian shields.[5] Sentries are able to move and levitate off of the ground through generators that create pockets of zero gravity.[6]

Sentries can also project force field barriers to stall or split up opposing forces.[5] This is done by turning bursts of energy into a small, impenetrable barrier to hinder, block, or funnel the advance of enemy troops. While creatures or machines of prodigious size can shatter the cohesion of these translucent force fields, ordinary soldiers and vehicles become fodder to protoss ranged weapons.[5]

Sentries an protect allies via guardian shields, created by weaving light into a semi-solid state. Through this, the sentry can surround itself with an area-encompassing shield to safeguard protoss ground forces. Projectiles or energy blasts that penetrate the field lose some of their kinetic or thermal energy, and part of their effectiveness. Due to its considerable coverage radius, the guardian shield is not powerful enough to make much of a difference against larger types of ordnance.[5]

Sentries also have the ability to create hallucinatory images[4] through an in-built holo-projector.[5] These holograms can draw enemy fire while a real protoss strike force maneuvers into position to deliver the killing blow.[4] These hallucinations are composed of solid light and are three-dimensional, able to mimic protoss warriors, vehicles, and constructs. Each replica, while limited in duration, is able to withstand some degree of punishment. The purpose of these lifelike images is twofold: making the enemies of the protoss believe they're fighting a much larger force than anticipated, and protecting protoss lives.[5]

By 2506, some sentries were outfitted with portable shield batteries to better sustain the lives of protoss warriors in battle.[7]

Sentries had also been incorporated into the Tal'darim arsenal by 2504[8] and by the End War, they had developed their own variant.[7] Nevertheless, some were left mostly unchanged, allowing for a varied array of robotic support and a certain degree of misdirection. Many Purifiers meanwhile retained sentries, in spite of their normal deployment of energizers. The Ihan-rii powered their sentries with volatile xel'naga relics called nebula wells.

After the End War, as part of an artistic movement calling back to the Golden Age of Expansion, some sentries were redesigned in the ancient styles of the era to complement vessels with longer histories.[9]

The sentry has a beam which does continuous damage to one target.[10] Their high gas cost relative to their low HP and attack power, delgates sentries as support units for other troops rather than frontline fighters.

Sentries are strong against mutalisks, zealots, and zerglings and weak against hellions, stalkers, reapers, and hydralisks.

Sentries are not usable in the StarCraft II: Wings of Liberty protoss mini-campaign.

Creates a wall of energy at target point, pushing nearby units away and making the terrain impassible. Massive units and the mothership's Vortex ability remove Force Fields.

Sentries can create a radius 4.5 aura which reduces incoming ranged damage to friendly units by 2.

The player may choose the energizer or havoc as sentry variants in the Legacy of the Void campaign. The sentry acts as a purely defensive support unit between Guardian Shield and Double Shield Restore, whereas the energizer and havoc can support the player's armies with more offensive-based abilities, and all three are highly viable.

Restore 3 shields a second to an allied protoss unit at the cost of 1 energy per 3 shields restored. Can be set to autocast.

Restore 3 shields a second to up to two allied protoss units at the cost of 1 energy per 3 shields restored. Can be set to autocast.

Zeratul has access to a variant of the sentry named the xel'naga shieldguard in Co-op Missions, with a similar campaign role of recharging allied shields.

Sentries can use Force Field to isolate enemy workers, preventing them from escaping their onslaught.[12] Force Field also proves to be very effective for splitting forces or preventing them from passing through choke points.[13] Melee units may be blocked with force fields and attacked with ranged units. Force fields can be broken by Massive units and ravager corrosive biles.

The table shows the effective health for a defender protected by Guardian Shield. The figure assumes the defender has 1 base armor (as is the case with most protoss units), and defender and attacker both have 1 defense and attack upgrade. For example, the defender lasts 66% longer against marines if protected by guardian shield. 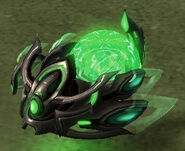 Ihan-rii sentry
Add a photo to this gallery

Ihan-rii sentry portrait
Add a photo to this gallery

Retrieved from "https://starcraft.fandom.com/wiki/Sentry?oldid=363386"
Community content is available under CC-BY-SA unless otherwise noted.