Start a Wiki
watch 02:27
The Loop (Games)
Do you like this video?
"Can't replenish its own shields. Glad to see protoss engineers make mistakes too."

The shield battery is a protoss support structure.

The shield battery's core contains a khaydarin crystal that absorbs and stores local psionic energy. The stored psi is transferred to protoss units via the energy spokes, allowing plasma shields to be recharged rapidly. While the battery has a limited energy capacity, it will steadily recharge itself over time,[1] extracting energy from the psionic matrix. The shield battery can likewise replenish the shields of photon cannons. While the shield battery prioritizes combat systems, it can be manually directed to recharge buildings in range. However, it can't replenish its own shields.[2]

Shield batteries were largely abandoned after the Brood War due to advancements in shield regeneration. However, improvements were made to the battery's throughput and capacity, causing some factions to reintegrate them. The Tal'darim have access to shield batteries, but often prefer to invest their resources in more offensive technologies.[3]

Along with pylons, shield batteries are the only buildings in the game that do not leave debris when destroyed (without counting the vespene geyser buildings).

Shield batteries were set to appear in StarCraft: Ghost, as an objective Nova had to target in the third chapter of the game.[4]

The shield battery retains its role in StarCraft II as a structure that restores protoss shields.[5] It was added into multiplayer in Patch 4.0.

In multiplayer, the shield battery restores shields of a single friendly unit within 6 range. Shields restore at 50.4 shields per second, drains 1 energy for every 3 shields restored. This ability is autocast on friendly units and photon cannons.

The shield battery appears in the campaign of Legacy of the Void as a basic building requiring a nexus. Their shield recharge can be set to autocast, which makes them considerably more useful. However, they only restore the shields of defensive turrets when set to autocast, not other buildings.

Karax is able to build shield batteries in Co-op Missions. Additional upgrades for them are unlocked when Karax reaches Level 6.

Allows the shield battery to grant defensive structures a shield for 10 seconds that absorbs up to 100 damage. 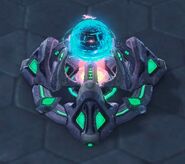 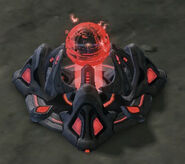 Tal'darim shield battery
Add a photo to this gallery

The StarCraft II shield battery model's central orb is a miniaturized version of the Purifier technology container from the Legacy of the Void campaign mission Forbidden Weapon.[10]

Retrieved from "https://starcraft.fandom.com/wiki/Shield_battery?oldid=359556"
Community content is available under CC-BY-SA unless otherwise noted.