"Ready to roll out!"

Template:SC1UnitBox The siege tank is a Terran vehicle that can be configured to fulfill both the armored support and the long-range artillery support roles.[1]

The dual-mode siege tank concept was a response to the Guild Wars and the goliath. Prior to the war, work had progressed on a static "final defense" cannon. However the war demonstrated the need for mobility and as a result an effort was made to make the cannon more mobile. The solution was creative. An existing tank design was modified so that it could operate as a conventional tank in addition to being able to deploy the cannon and become a static artillery emplacement at will.[1]

The AAV-5[2] was in service by the late 2490s, renowned throughout the Confederacy for its heavy firepower and stalwart emplacement/advance tactics.[1] It had a crew of three: gunner, driver, and commander/navigator,[2] though could still be crewed by a single operator.[3][4] In addition, the Arclite version could serve as an APC of sorts, carrying personnel into a hot zone and deploying them via side/rear hatches.[3]

The Arclite made navigation easy via its interior viewscreen, although a top hatch still existed should a crew member wish to survey the area personally and/or signal fellow soldiers.[3] The tank also provided a targeting computer, which not only keyed in on heat sources, but also identified their range, notably whether they were in range or not via visual and audio indications.[3]

Arclite armament consisted of twin 80mm PPG-7 plasma cannons[5] when mobile and the 120mm Shock Cannon when in siege mode.[1] Later on this was upgraded to the 120mm Mjolnir Artillery Cannon, which fired plasma shells in contrast to the standard explosives of the Shock Cannon.[5].

Experience found the AAV-5's protection and "assault mode" armament to be inadequate. This inhibited its ability to advance and establish a "siege mode" fire base. Furthermore, once in "siege mode" it became difficult to repel a close-assault by any enemy forces taking advantage of the "deadzone" formed by its artillery cannon, and even in the AAV-5 transform back into "tank mode", it was relatively undergunned and lightly armored. As such, it has been replaced by the Crucio variant, which has a more powerful "tank mode".[6]

The Crucio was designed to correct the perceived deficiencies of the AAV-5 and entered Dominion service as the AAV-5's replacement following the Brood War. The new turret layout features an upgraded assault-mode armament package so that the Crucio can fend for itself more successfully in an open battlefield. Force deployment costs for the Crucio have increased over the older Arclite, but the increased versatility of the powerful new siege tank more than compensates for the additional expense. The Crucio features twin 90mm cannons and has retained the 120mm Shock Cannon.[6]

The Crucio is equipped with a plasma gun.[7]

In tank mode the siege tank is decent against "Large" ground units. Arguably, it's still not as efficient as a group of marines, especially if a force is being moved by dropship (which can carry 2 tanks or 8 marines).

The siege tank is most useful in siege mode, fusing a powerful attack with the longest range in the game. In addition to supporting bunkers and defenses, two groups of tanks may carry out a "tank push"; the first group in siege mode covers the second group in tank-mode as they move forward to establish another fire base, from which the second group covers the advance of the first. The tank's siege mode range is greater than its sight range; supporting a tank with spotters is useful.

The Shock Cannon causes splash damage to all units and has a minimum range. Therefore tanks in siege mode need other units to guard it (perhaps even other tanks in siege mode), although these guards might take damage from the shock cannon as well as the enemy. The guards can also screen for the tanks as they withdraw. Transforming between modes takes time, during which the tank is unable to move or attack.

Some players prefer to "wall-in" their siege tanks, by erecting buildings to surround the tank, thereby preventing the enemy from getting closer than the minimum range of the shock cannon.

This greatly increases the damage and range of the siege tank's attacks, and gives them splash damage, but prevents the tank from moving. In siege mode, the siege tank has a minimum range it cannot attack within.

The siege tank has many stereotypical, military quotes. The driver of the tank is seen as a large man in body armor who speaks in army lingo. Several of his quotes are obviously taken from the classic Vietnam War films Full Metal Jacket and Apocalypse Now.

In StarCraft: Ghost, Nova was able to call down artillery support from siege tanks by identifying targets.[8] Siege tanks were player drivable in multiplayer, and were able to run over and crush other players and vehicles.[5]

The siege tank in StarCraft II represents the Crucio type.[6]

The siege tank continues to function as it did in previous games with the dual tank and artillery modes, except it doesn't require as much support as is needed in the original StarCraft. The tank cannot fire when moving, leaving the tank vulnerable to attacks by melee units.[9]

In Heart of the Swarm and Legacy of the Void, Siege Tech does not need to be researched.

Building an army of both siege tanks and Thors is possible, but expensive. The combination is difficult to stop.[10] 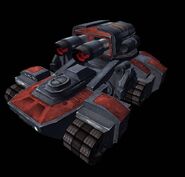 Early render of the siege tank in StarCraft II

Early render of a siege tank transforming in StarCraft II
Siege tank SC2 Cncpt1.jpg
A group of Crucios advance
Add a photo to this gallery

Retrieved from "https://starcraft.fandom.com/wiki/Siege_tank?oldid=62591"
Community content is available under CC-BY-SA unless otherwise noted.