View source
watch 03:01
Wiki Targeted (Games)
Do you like this video?
Play Sound
"Spectres. Tell me: Have you ever seen a spectre? No? Because they don't exist."

- Gabriel Tosh, rumored to be the first spectre, speaking to Cyb Roche of the Umojan News Service. Ms. Roche disappeared a week later and has not been seen since.(src)

Spectres are terran special forces operatives with psionic powers granted by the psionic reagent terrazine. Many are or were elite ghost agents which have been exposed to terrazine. However, some were neurally resocialized troops who were subjected to the procedure, and would have lesser psionic power. Spectres were created as part of Project Shadowblade.[1]

The Terran Dominion discovered and used terrazine gas, a potent psionic reagent, in 2501.[1]

Scientists consider the side effects of terrazine enhancement to be "unpredictable,"[2] but of what is known, its use allows a telepath to regenerate brain cells, overcoming memory wipes and increasing their psionic powers by 1 or more points on the Psi Index, with some approaching protoss levels of psionics. Spectres inhale terrazine like a drug from a bottle.

As a result of an alliance with the Umojan Protectorate and using their advanced technology, plus that stolen from Sector 9, spectres are difficult to detect via detectors or mind-reading (except by other terrans exposed to terrazine). Their hostile environment suits give a greater boost to strength and agility than the standard Dominion version,[1] and they were given sonic-dampening boots for quieter movements.[3]

Creating a spectre also requires the use of the element jorium, and activating them requires the use of a psionic waveform indoctrinator.[4] Jorium is required to stabilize the terrazine, and minimizes the insanity and hallucinations caused by the gas. A strict, to the minute schedule of terrazine and jorium intake can nullify the worst side effects of the spectre transformation.[1]

The results of the spectre procedure affects everyone slightly differently.[5][6] Many become eccentric, collecting devices such as dolls in an effort to enhance their powers.[7] Terrazine is addictive, and many spectres did not adhere to a strict schedule, instead overdosing. This results in side effects such as hallucinations and even violent outbursts.[1]

Ghost agent Nova Terra claimed that spectres always become psychotic.[4] Doctor Ariel Hanson disagreed, finding little to no evidence to support that spectres are more prone to aberrant behaviour compared to normal people, and believes that Nova had lied.[6][8] The former director of the reborn Project: Shadowblade, General Cole Bennett, emphasized the dangers of terrazine without jorium to stabilize its negative effects. Numerous spectres, such as Dylanna Okyl, had seemingly gone insane due to its effects.[1]

In 2501, the Terran Dominion discovered the fringe world of Demon's Fair. Investigators discovered a terrazine-releasing rift there, and upon realizing the gas enhanced psionic power, Emperor Arcturus Mengsk created a secret program, Project Shadowblade. The project was led by General Horace Warfield.

The head of Nova Squadron, Colonel Jackson Hauler, secretly an escapee from the Ghost Program, infiltrated the program under the name Cole Bennett. The gas was tested on several terrans, some of whom were low-level psychics, in order to observe the effects. "Bennett" secretly tested on himself. The project was violently dissolved. Three members were arrested, subject to neural resocialization and thrown into New Folsom Prison. Bennett made an escape.[1]

At some point, spectres were kept in stasis on Tartarus by order of Arcturus Mengsk.[9]

He eventually made contact with renegade ghost Gabriel Tosh, and discovered another source of terrazine on the fringe world of Altara.

The duo made an alliance with the Umojan Protectorate and, using a cloaked battle platform, Gehenna Station, along with advanced technology from the Umojans and the secret Dominion project Sector 9, began creating an army of spectres. They were mainly kidnapped ghosts, lured through pretexts into vulnerable positions. They had their neural implants removed to avoid detection and tracking by the Dominion.

They secured the help of an AI, Lio Travski, formerly a technopathic ghost and friend of Tosh's. Travski enabled them to send communications in the name of Emperor Mengsk.

In addition, they invented the psi indoctrinator, which enabled barely psychic resocialized troops to be made into a lesser grade of spectre.

In 2503 Tosh tried to recruit former friend Nova Terra, a ghost, but failed. His attack on Augustgrad also failed, losing them a number of spectres.

In the end, Terra led Dominion forces in a successful attack on Gehenna Station, killing several spectres and destroying the station. Tosh was only able to escape with six resocialized marines in indoctrinators.[1]

With the fall of Project Shadowblade, spectres became a rare sight in the Koprulu sector.[10]

"You guys did good. Now me and my spectres will finish the job. We'll kill Mengsk...and burn his Dominion to the ground."

By 2504, a number had been captured and deactivated by Nova Terra, ending up in New Folsom Prison.[4][11]

During the Second Great War, Tosh sought to hire Raynor's Raiders to rescue the prisoners, and acquire jorium and terrazine to reactivate them. Tosh's plans were discovered by Nova, a Terran Dominion ghost. Nova attempted to dissuade Raynor from raiding New Folsom by claiming spectres were psychotic killers.[4][11]

Jim Raynor was unwilling to trust a Dominion agent and followed Tosh's plan of action. Though the prison was alerted by Nova, the breakout succeeded.[11] As promised, Tosh and the spectres agreed to help the Raiders in the revolution against the Dominion.[7] As a precaution, Raynor also extracted a promise from Tosh that only volunteers would undergo the spectre creation process.[6][12]

Nova convinced Raynor that Tosh's ambitions were too dangerous to be allowed to succeed. The Raiders helped the ghost destroy the spectre training facility on Avernus Station.[4] Nova then assassinated Tosh.[13]

"Usher them unto the infinite abyss!"

- Spectre in service of Moebius Corps(src)

By 2506, spectres were being utilized by the Moebius Corps. Spectres in the service of Moebius Corps were seen by Zeratul on an old Moebius Foundation hybrid lab.[14] Later they would be spotted on Sky Shield,[15] the attack on Ulnar,[16][17][18] and the defense of Revanscar.[19]

Spectres were present among the ranks of Raynor's Raiders during the joint assault into the Void. While there, they took part in protecting Sarah Kerrigan as Ouros transferred his essence into her.[20]

In early builds of StarCraft: Ghost, spectres would be created by Jackson Hauler and his Omega Squadron, and they would steal the gas from sites on Mar Sara, Aiur and Char. Hauler hoped to send his spectres across the sector in order to dominate it. Nova faced off against three spectres, Artemis, Aries, and Vulcan, and finally Hauler himself. Hauler swore his spectres would be spread across the galaxy and carry on his legacy, and Nova swore she would hunt down the last of them wherever they appear.[21]

Whispers of Oblivion
Legacy of the Void
Into the Void

+1
In the StarCraft II: Wings of Liberty campaign, spectres are available as an alternative to ghosts, granted if Jim Raynor sides with Gabriel Tosh. They are superior to ghosts in dealing with massive units due to their psionic lash and bonus damage against armor. On the other hand, they possess less HP than ghosts, and psionic lash is less energy efficient than the ghost's equivalent, snipe. While still not very effective against massed zerg, spectres have the ability to stun a group of units in a small radius, allowing time to either retreat or effectively support other units. In the Into the Void, The Essence of Eternity mission, they have both the permanent stealth and psionic lash upgrades available by default.

If taking their psionic lash and cloaking abilities into account, spectres are good against siege tanks, thors, diamondbacks, battlecruisers, immortals, archons, colossi, void rays, carriers, ultralisks, and brood lords. They are weak against marines, zerglings, and zealots, and are not cost-effective against marauders, stalkers, or roaches.

Armor upgrades increase health of affected units by 5% per level.[22]

This combat suit comes with a psi enhancer dedicated entirely to maintaining cloak. This allows the spectre to effortlessly maintain a cloaking field and channel his psionic energies elsewhere.[24]

The spectre targets an area with its rifle, stunning units within for a short period of time.

With proper training, spectres can unleash a concentrated blast of psionic fury at a single target. This blast drains the spectre's energy reserves, but it will kill most targets outright. For obvious reasons, Remedius Medical Systems recommends limiting this training to spectres who have an exceptionally high opinion of their superior officers.

Spectres could be upgraded with Impaler Rounds at the Hyperion's armory. Although the button states that it increases damage against light units by 5, the actual upgrade increased damage against armored units instead. Spectres also had a Consumption ability identical to Tosh's, draining HP from allied units to recover their energy.[25]

At one point, Spectres may have had the Lockdown, Nuke, and Hallucination abilities.[26]

Tychus can deploy an elite outlaw spectre named Nux in Co-op Missions, who can call down an Ultrasonic Pulse to damage enemies in an area.

Spectre skins for Nova Terra, Tracer and Illidan Stormrage appear in Heroes of the Storm. In addition, spectre iconography appears on the third tint of the game's vulture mount. The phantom is also available as a mount.[27]

Spectres were to be a key part of StarCraft: Ghost. Various boss fights with the spectres would be key for the later missions of the game, and one of the objectives involved destroying the spectre pods that kept them in stasis on Gehenna Station.[21] 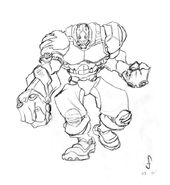 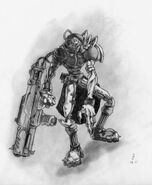 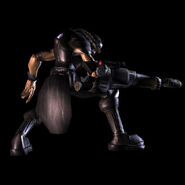 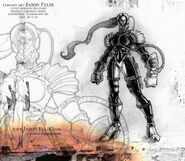