per Structure Morph and Evolution Rate mastery point. Down to a minimum 12 (Co-op Abathur)

50
The spine crawler is a mobile zerg ground defensive strain, generated as a replacement to the sunken colony following the Brood War in order to better protect the Swarm against ground threats. The spine crawler is capable of repositioning itself on the battlefield to gain better control of an area.[1] The spine crawler's tentacle can stretch nearly twice its height and slam into ground targets.[2]

Spine crawlers are ground defensive structures that can uproot and relocate. They can only plant themselves on the creep. The spine crawler will stop rooting itself if the creep under it recedes during the rooting animation.

Like the spore crawler, the spine crawler will slowly die if rooted in ground not covered with creep. They can, however, survive indefinitely without creep as long as they are uprooted.

Players will want to spread creep onto the map to create more space for their crawlers, such as putting creep onto choke points.[3] The ability to mobilize base defense also allows for new streamlined strategies that would call for less units, as they can be redistributed across the base depending on the situation. They can be used offensively, moving them forward with the creep as either fall back position or a long ranged attack unit (something which the zerg generally lack), depending on where the enemy attacks.

In Co-op Missions, all zerg commanders except Dehaka and Stukov can construct spine crawlers.

Crawlers can uproot themselves from the creep and move about, but can only plant themselves back onto the creep. They move much more quickly on the creep than off it.

A spine crawler is spawned by The Butcher's Lamb to the Slaughter ability when its Butcherlisk skin is equipped in Heroes of the Storm.[4]

The concept of mobile defenses in StarCraft II began with the phase cannons, but was transferred to spine and spore crawlers when the phase cannon proved to be unbalanced in testing.[5] Prior to this, crawlers were stationary structures. They underwent a visual re-design late in the game's development cycle.[6]

In StarCraft II: Heart of the Swarm, the spine crawler was made larger (its collision size increased from 0.85 to 0.95), allowing it to block pathing of small units such as zerglings that try to pass between them and other buildings.[10]

It was recommended that spine crawlers be built near mineral fields as a counter to the oracle's entomb ability, as they would automatically attack the energy shields while drones would not.[11] 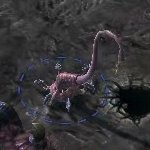