The stalker is a Nerazim cybernetic war machine.

The fall of Aiur demonstrated to the Dark Templar that more than just stealth and guile were required to defeat the zerg. Hence, the Dark Templar developed the stalker, a war machine inspired by the Khalai dragoon. While dragoons were piloted by crippled protoss warriors, the stalker is controlled by the shadow-essence of a Dark Templar warrior fused into a metal body.[2] Nerazim who control stalkers undergo this process voluntarily,[3] said process involving a Void-powered ritual[1] which fuses their shadow essence to the machine. This gives them a preternatural degree of control over their new bodies. The process cannot be reversed.[3]

Stalkers were in use by the Daelaam as early as 2502.[4][5] They were in use by the Tal'darim by 2504.[6] Some voluntarily chose to become stalkers in order to better hunt and kill their foes because they only wished to sharpen their combat skills and serve their Highlord, as not all Tal'darim seek ascension.[7]

Stalkers are often used to support zealots on the battlefield.[8]

"I hope it hurts every time they get their oil changed."

Stalkers stand roughly twice as tall as a terran wearing CMC armor. They draw their psionic power from their host Nerazim's connection to the Void,[1] and are armed with carapace-mounted particle disruptors adept against both ground and aerial targets.[2] These weapons draw upon the power of the Dark Templar’s training and technology to fire lethal blasts of entropic Void energy. Each shot destabilizes matter at a fundamental level, and ultimately tears it apart by disintegrating its atomic composition. The particle disruptors are especially effective against materials with high hardness indexes—like chitinous carapaces or heavy armor plating.[3]

Stalkers have been credited with many fantastic powers since their battlefield début. However, only one is witnessed consistently: an ability to instantly teleport, or "blink", from one spot to another.[2] This ability requires augmentation to a stalker,[9] through the implementation of a device called a Void displacer. When enabled, the displacer grants stalkers the ability to fade and materialize instantly at a different location, affording them an unprecedented degree of mobility, perfect for quick strikes against the enemy.[3] The improved mobility allows stalkers to conduct ambushes, catch fleeing foes, and generally engage on their own terms,[2] making the stalker the perfect warrior for raiding enemy supply lines and teleporting away before reinforcements can arrive.[1] However, each "blink" generates a flux that taxes the stalker's systems. It must go through a brief recharge period before initiating another displacement.[3] When the Daelaam retrieved the Spear of Adun, stalkers were outfitted with reactors technology linked to the solar core, allowing rapid shield regeneration upon using its displacement abilities.[10]

Years after its conception, Nerazim stalker technology benefited from Khalai engineering, and attempts were made to integrate dragoon chassis reinforcement into the battle strider's frame.[11] At least some of these stalkers utilized the telltale golden Khalai color scheme, as opposed to the stalker's standard platinum.[12] Purifier stalkers were fully automated, and were able to draw from a complex log of battle interactions.

After the End War, a movement back to the artistic style of the Golden Age of Expansion lead Khalai phase-smiths to redesign several stalkers in the style of the ancient Templar. This elicited offense from many Nerazim.[11]

Stalkers can dance like a dragoon[14]. This may be enhanced by Blinking, especially in multilevel terrain.

Stalkers are effective against units with low damage per second, especially with Blink micro.[15] The reverse is true for offensive units, especially those with attack bonuses against armored units.[16] zerglings are cost effective counters to stalkers; the Blink cooldown is too slow to ensure escape.[15]

In the campaign of Legacy of the Void, stalkers have an additional passive ability once selected at the War Council, their Blinking causes them to rapidly regenerate shields for a brief period, in addition selecting the stalker also changes its voice lines to have a deeper pitch. The stalker is one of three ranged attacker role available to the player in the campaign, the other two being dragoon and adept. The stalker is the most flexible of the three options in terms of mobility, as its Blink allows for critical mobility when moving up and down cliffs and finding hidden resource pallets, and the shield regeneration and mobility allows them to focus fire key targets while maintaining situational durability. Given their bonus damage to Armored targets they compare more to the dragoon than the Light-enhanced adept. Their damage per shot is lower than the dragoon's but they have a faster firing rate that makes up for it, and as long as they don't get hit by overwhelming damage quickly so they can do one or two Blinks their shield regeneration can be comparable to the enhanced health of the dragoon.

Vorazun can build stalkers in Co-op Missions. Once she reaches level 4, stalker upgrades become available at the twilight council. Stalkers are used by Amon's forces in Co-op Missions. The slayer, a variant of the stalker, can be used by Alarak. Zeratul gains access to a stalker variant named the xel'naga ambusher.

Additional stalker upgrades may be researched at the twilight council when playing as Vorazun in the Co-op Missions mode of Legacy of the Void.[18]

- Samwise Didier on the stalker's origins(src)

The idea for a "dark dragoon" stems back to the original game. When planning for StarCraft: Brood War and StarCraft 64, Samwise Didier pitched the idea of a Nerazim dragoon, but every time he would create concept art for it the art was scrapped. This concept would later become the basis for the stalker.[19]

For StarCraft II, the idea for the stalker came after the conception of the immortal. While the immortal was the thematic successor to the dragoon, gameplay-wise, there was room on the protoss tech tree for a less expensive, more dynamic unit. The developers asked, "why don't we make a 'dark dragoon'?" By this point, the developers had already made "dark" versions of protoss units. Samwise Didier came up with a concept of what a "dark dragoon" would look like.[20] It took awhile for the specifics to be nailed down.[21] One issue for the dragoon in StarCraft II was that the developers wanted to add "micro mechanics" for protoss gameplay, while the dragoon was "a sort of all-purpose menace that just walked up and fired at enemies." The protoss, being a high-tech race, would be the ones to possess teleportation abilities. Expanding on this idea, the developers tried to make the dragoon faster, smaller, and more agile, and gave it a short-range blink ability. Thus, the stalker was born. Not only did this make protoss gameplay more micro intensive, but it gave the race a higher skill ceiling, which was a priority for the team. This became apparent in League matches, as a Bronze-level player would use stalkers far differently than in Diamond-level.[20]

The design was finessed several times as its asymmetrical shield and legs gave it a zerg-like appearance. This dictated that platinum be made the dominant color in order to distinguish it (which led to platinum being the dominant color for Dark Templar as a whole). However, the shield made the stalker look heavier and more imposing from some angles, while weak and frail from other views. It was eventually settled that the stalker should have a medium sized shield to interfere the least with visual communication.[22]

Eventually, Samwise Didier called for an overhaul, wanting the stalker to be based more on his original concept art. The stalker was thus redesigned,[22] and the new model was revealed at BlizzCon 2008.[23]

Stalkers appeared in early builds of Heroes of the Storm.[24] 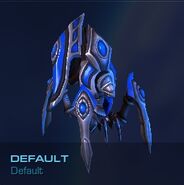 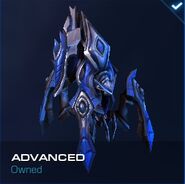 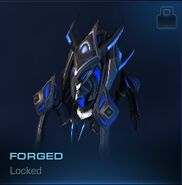 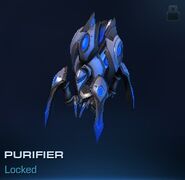 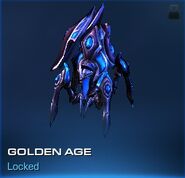 Xel'naga ambusher portrait
Add a photo to this gallery

Retrieved from "https://starcraft.fandom.com/wiki/Stalker?oldid=330733"
Community content is available under CC-BY-SA unless otherwise noted.