Enslavers is a StarCraft campaign set just after the the fall of the Terran Confederacy.[1]

Arcturus Mengsk, Emperor of the Terran Dominion, called a meeting with one of his Alpha Squadron commanders to eliminate the threat of the notorious smuggler Alan Schezar, whom Mengsk believed was plotting a new smuggling scam. Schezar was defended by a personal militia, called Schezar's Scavengers, although the zerg was also sighted in the area.

Alpha Squadron set up a small outpost on the planet, built up a large force, and moved towards a city where Schezar was believed to be hiding out. The entire city was infested with zerg, and Mengsk commented that Schezar had to be crazy to operate out here.

The zerg put up heavy resistance, seeming to defend Schezar's base of operations. Mengsk wondered how Schezar was doing this. Nonetheless, Alpha Squadron destroyed the base and the nearby zerg.[2] 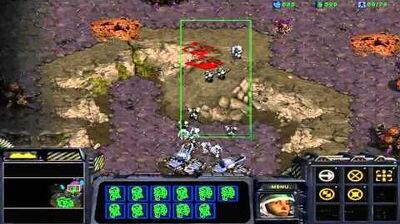 Mengsk informed his commander that the base destroyed in the previous mission was not Schezar's primary fortress: A larger base was located to the southeast with a zerg cerebrate near it. Schezar could control an entire zerg brood through its cerebrate. Mengsk sent two of his assets to help the commander: Tom Kazansky, whom Mengsk introduced as the best Wraith pilot in the fleet, and Magellan, a cybernetic construct who commands a science vessel.

Magellan picked up a transmission on the hyper-waveform emitter, which he showed to Mengsk and the commander. It was a protoss called Mojo. He had been captured by Schezar's Scavengers and required assistance. He advised Mengsk not to destroy the cerebrate, as that would simply drive the zerg insane, causing them to overrun both the protoss and terran troops, while Alan Schezar could always gain control of another cerebrate. Mengsk ordered the commander to belay Mojo's request.

The mission offers the player one of two choices, leading to two different endings.[3] Both endings are covered by this article. The canonical ending (the ending which leads to Enslavers: Dark Vengeance[4] is covered first).

Schezar's base was protected by zerg and housed a number of protoss prisoners, including a high templar. Mengsk did not know why Schezar would be interested in keeping protoss around.[3]

This section covers the canonical storyline.[4]

Disobeying orders, the commander took Magellan and Kazansky with him to rescue the captured protoss from Schezar's base. Once freed, the protoss began to fight back. The mission ended at this point.[3]

Mojo contacted them again, thanking the commander for rescuing his brethren, even at the risk of his career. Mojo was trapped in a stasis cell, along with the Danimoth (an arbiter) and the Warbringer (a reaver). Mojo's formidable psionic powers allowed him to communicate with the Alpha Squadron commander, however.

The commander traveled to the area where they were imprisoned, but didn't start with a base. Schezar's forces were split into three. Each base surrounded a stasis cell.

The rogue Alpha Squadron element attacked each base in turn, freeing one of the prisoners or vehicles, along with a number of probes. With these resources, the commander could build a base, making the next series of assaults easier. Upon rescuing all three, the mission ends.[5] 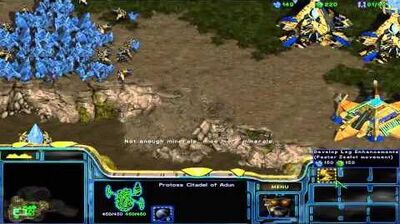 Mojo informed the commander that Schezar had taken shelter in an old protoss fortress on Aiur. Just west of the fortress was an old temple where Schezar located old protoss technology that his ghosts were using to psychically control cerebrates.

To put an end to the experiment, Schezar's Scavengers and the cerebrate had to be destroyed. As part of the unusual mission objectives, all heroes are expendable.[6] (However, Mojo survived and appeared in Enslavers: Dark Vengeance.)[7]

At the opening of the conflict, Magellan detected a strange ultralisk approaching the combined terran/protoss defenses. Mojo called it the Torrasque, a powerful ultralisk which has slain many protoss. It could reincarnate after being killed or mind controlled in only a few minutes.

Magellan noticed that it had the same genetic signature as the cerebrate, and Mojo believed that killing the cerebrate would prevent the reincarnation of the Torrasque.

Without its connection with the Overmind, the cerebrate could not be reincarnated. As a result, the allied forces killed it and were able to destroy Schezar's base. Schezar was not found, however.[6]

Since the Torrasque respawn under the enemy control after the player cast Mind Control upon it, it is possible to the player to control several torrasques during the mission. 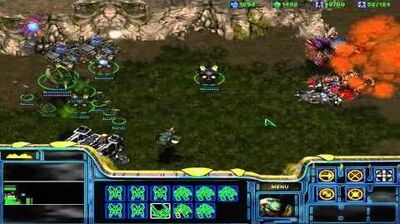 This section covers the other possible storyline.[4]

Alpha Squadron fell upon the zerg near Schezar's base, destroying the cerebrate. However, Gui Montag reported that Schezar is nowhere to be found.

Mojo communicated with Mengsk again, calling him a fool. He said that Schezar was now on his way to Aiur, where he would use khaydarin crystal amulets, frequently carried by high templar, to dominate more cerebrates. He said that Mengsk has called doom upon both the protoss and terrans.[3]

Mengsk brought his forces to Aiur to force a decisive showdown with Schezar. Aldaris confronted him via viewscreen, saying because the terran commander has abandoned protoss to a human criminal, the Conclave has ruled that their lives are forfeit. He demanded their surrender.

Mengsk countered that Schezar was able to control a cerebrate because of the protoss and their technology, which he plundered from one of their temples. Mengsk would do whatever it takes to destroy Schezar and the protoss temple.

Aldaris threatened the commander, saying the Conclave would not rest until all terrans have been expunged from Aiur soil, but Mengsk cut him off. "Don't these guys ever shut up?" quipped Mengsk.

Mengsk ordered the destruction of the protoss temple. This would prevent the protoss from summoning reinforcements. Then Alpha Squadron could destroy Schezar's Scavengers. As part of the unusual mission objectives, all heroes are expendable.

While Alpha Squadron was successful in destroying the Scavengers, Schezar was never found.[8]

While Alan Schezar was never found by Arcturus Mengsk, he would make a reappearance in Enslavers: Dark Vengeance, along with Mojo.[7]

The terrain for two of the maps were taken from unused missions in StarCraft.