Filled with breathtaking dogfights and rousing mecha action, this psychological thrill ride pits a young viking pilot against his former mentor--and the lives of an entire terran colony hang in the balance. Will youthful confidence and determination triumph, or will years of battle-hardened experience spell the doom of them all?[1]

Wes Carter, pilot of a Wyrm mechanical walker/flyer, was trying to save the colony of Ursa from an attacker -- his mecha mentor, Captain Jon Dyre, who was using the superior Viking ground/air combat facilitation system. Dyre had overused stimulants, a possible explanation for his insane behavior.

Carter tried to convince Dyre not to attack the civilians, and lured him away from the main colony. Dyre was not fighting at his best, but was still very dangerous and nearly killed Carter during the confrontation.

Carter questioned Dyre's motives and sanity over the radio, finally convincing Dyre to face him head-on.[1]

Wes Carter believed that Dyre had acted "distant and haunted" since coming to Ursa, and tried to tell a commanding officer this. The officer tried to dismiss the complaints, but Carter appealed through his relationship with Dyre, pointing out he had fought in 29 campaigns with Dyre and knew when something was wrong with him. The officer promised to evaluate Dyre after the Viking presentation, in which Dyre would show off the new military machine.

Carter had noticed other odd behavior in Dyre, such as his abuse of stimulants, his lack of enthusiasm for Dominion military duty, and odd comments about the Viking.

At the presentation in the middle of the primary military base, Dyre went out of control and crippled the base, leaving the Dominion with no ability to stop him. Carter had to jump into his Wyrm and do his best to save the colony.[1]

The adrenaline-pumping firefight between mentor and protégé escalates to a fierce climax. Will the young Viking pilot outwit the man who taught him everything? Or will the teacher remain the undisputed master of heavy armor--and doom a colony?[2]

Carter once again flew away, leading Dyre to a mountain range. Dyre was fooled into falling into a trap, but was still able to destroy Carter's Wyrm.

Dyre couldn't free himself, and Carter asked for an explanation for the infestation. Dyre told him about his career-making campaign, fighting "single-handed" against the zerg on Ursa years ago. He believed the zerg had developed a secret form of infestation, which would revert upon the terran's death, but his superiors were uninterested in his report. He massacred his own unit, but said this was "mercy killing". Still, this act affected him deeply, and left him unwilling to return to Ursa. When he did, he tried to wipe out the "secret infestation".

The Dominion brass decided to cover up the incident as best as they could. Carter didn't believe Dyre's story, but believed he was worthy of respect for fighting his demons for so long.[2] 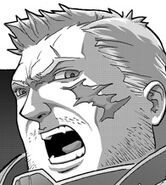 Captain Jon Dyre
Add a photo to this gallery 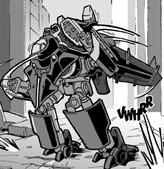 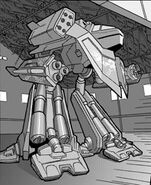 Wes Carter's Wyrm
Add a photo to this gallery

Simon Furman would like to tie-in the events of Heavy Armor with the StarCraft comic at some point in the future.[4]

Retrieved from "https://starcraft.fandom.com/wiki/StarCraft:_Frontline:_Heavy_Armor?oldid=332804"
Community content is available under CC-BY-SA unless otherwise noted.