StarCraft: Frontline: Voice in the Darkness

Voice in the Darkness

An evil voice has been whispering in the darkness, a voice gone unheard...until now. When a terran archaeological mission falls prey to the heinous acts of the Voice, a brave dark templar team will have to face down a nightmarish enemy or the whole Koprulu Sector will spiral into madness...

A pair of Moebius Foundation researchers, Hassan and Precht, discussed the xel'naga alien ruins they were investigating at the KL-2 research site. Precht was weirded out by the place, as well as by Dr. Morrigan, whom he believed was a telepath who talked to herself.

The researchers had built a psionic amplifier at Morrigan's direction, and she told the two researchers how "it" spoke to her, giving her the plans for the amplifier, and how with her enhanced powers she could free it from its prison. The creature emerged, immediately taking over the minds of the researchers.

A team of Dark Templar led by prelate Azimar arrived at the site, as the Void had been "defiled" there. One of his Dark Templar, Xy'tal, revealed his dislike for the terrans, saying they had brought this misfortune onto themselves. Jarzul scouted the area, finding twenty-five butchered terran corpses but noting the facility was designed to hold twice as many people. Jarzul was somehow spotted and killed.

Azimar and Xy'tal rushed to avenge Jarzul, finding Hassan, who was oozing black liquid from his eyes. Hassan spotted and fought them, withstanding the loss of a hand and putting out Xy'tal's left eye. Hassan, claiming to be a powerful entity inimical to the xel'naga, spewed a noxious crackling substance on Xy'tal. Fighting Azimar, Hassan tried to mentally enslave him, and said that if Azimar resisted he would devour his soul. Azimar pushed out the mental invasion and stabbed Hassan to death with his warp blade. Hassan disintegrated, and as he did so the entity revealed it had converted many other bodies.

Azimar revealed some of what he saw in Hassan's mind—the entity was ancient, vast and evil. It had been bound there, but the binding was wearing away. Azimar believed that only the fleet could defeat the creature, but Xy'tal believed that calling on the council's help to get the fleet would take too long. Azimar went on to say the creature could not easily dominate the Dark Templar due to their mental training, but they had to hold on to their beliefs and identity to resist.

As the Dark Templar fought their way into the complex, killing the converted researchers, the entity called to Xy'tal, calling the xel'naga false gods and offering him power and a relief from bitterness if Xy'tal would follow it. In the central chamber, the Dark Templar met the last researcher, Morrigan. She revealed that the entity had been feasting on the terrans' psionic essences but that it preferred the more powerful protoss—such as Xy'tal. Azimar and Xy'tal fought, while Morrigan revealed that the entity would soon have the power to escape its prison. Azimar tried to reach Xy'tal and was successful to some extent; Xy'tal began to resist, surprising the entity, but it wasn't until he cut off Azimar's right hand that he broke free. The entity tried to punish Xy'tal, but he slew Morrigan. The creature emerged from beneath the ground and physically fought the protoss. Xy'tal sacrificed himself by releasing the energy in the Argus crystal to either bind the entity again or destroy it. The other Dark Templar made it to safety as a massive explosion seemed to destroy the creature.

The protoss fleet investigated KL-2's asteroid field but could not locate the creature. However, as they left, it taunted Azimar, using an image of Xy'tal's face...[2] 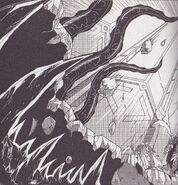 Voice in the Darkness

Josh Elder pitched the story as "StarCraft meets Cthulu." Micky Neilson and James Waugh initially rejected the idea, but it remained in their minds. Over time, they saw they could make the idea viable and gave Elder the go-ahead.[3]