StarCraft: The Board Game

StarCraft: The Board Game

StarCraft: The Board Game is a 2-6 player board game, published by Fantasy Flight Games and released in October 2007. It features some 180 small pieces for the various races and a modular "board" made up of various planets.

Pre-release copies were handed out at GenCon 2007, and pre-orders of the game started arriving in Australia on 19 October 2007.

The game features a modular gameboard consisting of up to twelve (depending on the number of players) specific planets in the StarCraft universe. Players control the familiar terran, protoss, or zerg air and ground units in a bid for domination of these worlds. A diceless, card driven combat system allows players to modify and upgrade their faction with a wealth of powerful technologies.

Most of the units are described with detailed miniature pieces. Worker units (SCV, probe, drone) and transport units (dropship, shuttle, overlord) are represented by tokens. Orders are issued with tokens representing different orders, namely Combat Tokens, Research Tokens and Production Tokens. When an order is given, cards called Event Cards, Combat Cards and Upgrade Cards are used to judge the outcomes. The cards are divided on the basis of tiers. Factors such as splash damage are also featured.

The base game features six factions, based on the characters of Jim Raynor and Arcturus Mengsk for terran, the Overmind and Sarah Kerrigan for zerg, and Aldaris and Tassadar for protoss. An online expansion published by Fantasy Flight Games allowed for one of the terran players to be proxied for Gerard DuGalle. Each faction has a different in-game focus, modified by different tech cards and leadership abilities that change their gameplay style. Normally each faction can win by gaining 15 conquest tokens, wiping out all enemy players, or through a special faction specific victory condition. The Brood War expansion added the ability to swap out the victory condition at the start of the game for another leadership card benefit.

The developer created a Brood War expansion for the game.[1] This expansion added new leadership cards to change the way battles are fought, the units added from the Brood War computer game. Hero units that can be deployed on the board such as Norad II, Fenix, and Torrasque were also added in this expansion, as well as new mechanics for each race, including collateral damage and mind control. The expansion also added scenarios that can be played to reenact battles from StarCraft universe.

The game has an optional United Earth Directorate faction available for download, replacing one terran faction of the players' choice.[2]

Typhon is a mini-expansion. It consists of a single planet named Typhon, and was available exclusively at the 2008 Blizzard Entertainment World Wide Invitational.[3]

Complete setting of the game, minus the game board. The player sheets are laid together here.

A pair of Combat Cards.

Concept art of the arbiter model.

Concept art of the archon model. 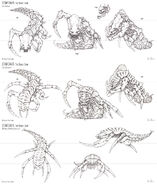 Concept art of the defiler model. 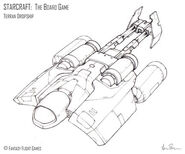 Concept art of the dropship model.

Concept art of the marine model.

Concept art of the mutalisk model.

Concept art of the overlord model. 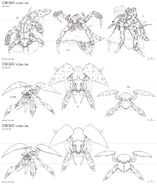 Concept art of the queen model.

Concept art of the reaver model. 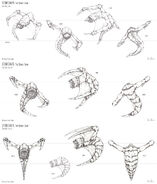 Concept art of the scourge model.

Concept art of the zealot model.

Concept art of the zergling model. 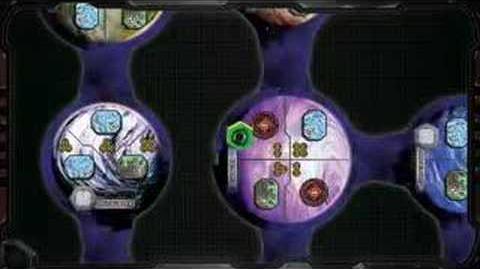