StarCraft: The Board Game: Typhon

StarCraft: The Board Game: Typhon Expansion Promotion is a mini-expansion for StarCraft: The Board Game. It consists of a single planet named Typhon and the cards and tokens needed to use that planet in the game. The Typhon Promotion was available exclusively at the 2008 Blizzard Entertainment World Wide Invitational in Paris, France, and has never been reissued, making it exceptionally rare.[1] 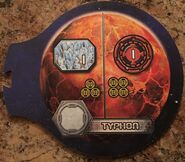