Edit
watch 02:59
Wiki Targeted (Games)
Do you like this video?
Play Sound

StarCraft Episode III: The Fall began with the invasion of Aiur. In this campaign, the player took the role of Executor Artanis,[1] recently appointed to replace Tassadar.

The protoss marshaled their defenses two days after the Overmind landed on Aiur. The Conclave appointed Artanis as Executor to replace the absent Tassadar. Judicator Aldaris was assigned to counsel Artanis, as he had with Tassadar.

The Conclave dictated that the first priority was strengthening defenses and Artanis deployed immediately to defend the outpost of Antioch and prevent the fall of the province.[2] Antioch was under siege by elements of the Tiamat Brood and the defenders, led by Praetor Fenix, were hard pressed. The outpost was relieved and further reinforcements drove the invaders from the area.[3]

Main article: Into the Flames

Temporary Fleet of the Executor victory, Cerebrate slain but reincarnated

The following night Aldaris congratulated Artanis and Fenix for their successful action, commenting that Tassadar's desertion had shaken his faith in the Templar Caste.[4] Tassadar suddenly joined the discussion remotely and admonished the Judicator for his lack of faith and revealed why he had declined to return to Aiur.

After the zerg left Tarsonis Tassadar was drawn to Char by a powerful psionic call where he encoutered the Dark Templar.[5] Tassadar learned from Dark Prelate Zeratul that the Overmind's control over the zerg was dispensed through the underlings called cerebrates and that if these intermediaries were destroyed, the zerg would fall.

Although Tassadar refused Aldaris' demands to return to Aiur, his counsel was heeded. A plan was formed where Fenix would attack a cerebrate while Artanis kept the defenses occupied.[6] The attack was successful but for reasons not yet understood by the Khalai the cerebrate was reincarnated after supposedly being slain.[7]

Aldaris believed Tassadar had maliciously drawn the protoss into making the futile attack and branded the templar as a traitor.

With the ultimate failure of the strike against the cerebrate, Artanis and Aldaris led their force to the zerg-occupied province of Scion while Fenix remained to garrison Antioch. The hive cluster at Scion was destroyed.

However the zerg returned to Antioch. Fenix called for aid as the protoss came under attack by overwhelming forces. Help was not immediately forthcoming and Aldaris implored Fenix to hold as long as possible.[8]

The Fall of Fenix[]

As the zerg overran Antioch, Fenix came face to face with hydralisks. At that critical moment the templar was left vulnerable when his power suit's psionic blade emitters failed. Fenix was felled and believed slain.[9]

The Search for Heretics[]

The Hunt for Tassadar[]

Main article: The Hunt for Tassadar

Fleet of the Executor victory over the Zerg

The Conclave believed the protoss were winning the war against the zerg. Now it considered Tassadar and his heresy to be the greater threat. Artanis and Aldaris were dispatched to arrest Tassadar and bring the former Executor to stand trial for treason.

The small protoss fleet arrived at Char. Although the zerg had departed the planet, Aldaris claimed he could still sense a "lingering darkness there" and summoned Artanis to locate the source. The force made their way through light zerg resistance to Tassadar's base.

Upon arriving at the base they encountered Tassadar and Jim Raynor. Tassadar was shocked that the protoss would send forces simply to arrest him when Aiur was under siege. Aldaris was equally scandalized that Tassadar had taken to consorting with terrans.

Despite Aldaris' orders Artanis did not arrest Tassadar. Tassadar explained that only the energies wielded by the Dark Templar could permanently slay a cerebrate. Artanis agreed to help Tassadar find the missing Dark Templar.[10]

Fleet of the Executor victory over Zerg Swarm and Terran Dominion

Aldaris was displeased with Artanis' actions of following Tassadar and openly defying the will of the Conclave, but he was unable to persuade the Executor away from attempting to rescue the Dark Templar. The Judicator was disillusioned because he believed Tassadar was lost to the Protoss. Artanis' and Tassadar's objective was a terran-built installation where the Dark Templar were believed to be sheltering.

Multiple zerg hive clusters and elements of the Terran Dominion Armada were active in the area. The latter became hostile when the protoss refused to heed General Edmund Duke's demand to withdraw.[11]

The protoss successfully fought their way to the installation's entrance.[12]

The terrans and protoss continued to fight in the wastes of Char. In one action the protoss used dragoons cloaked by an Arbiter to destroy a terran encampment. The encampment contained one goliath and one self-propelled artillery piece.[13]

Main article: Into the Darkness

Tassadar sensed that Zeratul and his brethren were close by and insisted on scouring the area to find the Dark Templar. Tassadar feared they may have been in grave danger as he and two zealots entered the base. Additional protoss reinforcements and surviving terrans joined them in common cause against the zerg. Inside the installation they found Zeratul and the Dark Templar.[14]

Zeratul was gratified for the assistance. Despite the Dark Templar's wariness of the Conclave, Tassadar appealed to their sense of duty to Aiur and his personal relationship with them to convince the outcasts to return with him to Aiur.[15]

Tassadar led Artanis, the Dark Templar, and Raynor's Raiders to Aiur. Word of Tassadar's "treason" preceded him. They arrived to find Fenix, now a dragoon, marshaling forces to join them.[16] Realizing the Conclave would continue to oppose them, therefore putting at risk the survival of the protoss, Tassadar ordered an attack on Kor-shakal.[17]

The attack successfully penetrated the defenses but Tassadar was appalled by the sight of his brethren slaughtering one another. To stop it he willingly surrendered himself to the Conclave's judgement. He implored Artanis to continue resisting the zerg.[18]

The Trial of Tassadar[]

With Tassadar imprisoned by the Conclave and awaiting trial the Dark Templar vanished. Without Tassadar and the seeming abandonment by the Dark Templar, Fenix was pessimistic about the prospects of defeating the zerg. However, he was determined to fight on. As the trial was unlikely to be fair the dragoon resolved to rescue Tassadar. Raynor, aboard the Hyperion, gladly volunteered the aid of his troops.

The attackers fought their way to the stasis cell holding Tassadar and freed the former executor. However the rescue attempt was expected and the would-be-rescuers were quickly surrounded by more troops loyal to the Conclave.[19] The arrest of Tassadar and his followers was prevented by the reappearance of Zeratul and the Dark Templar. After trading barbs, where Zeratul attributed the failure of the protoss war effort to the Conclave's hubris, Tassadar and his followers went free.[20]

Assault on the Overmind[]

Once again free Tassadar rallied his followers. To defeat the zerg they resolved to destroy the Overmind. Before assaulting the Overmind directly the beast's defenses would need to be reduced. This would also distract the Overmind long enough for the protoss to assault it directly. To do this the protoss struck at the nearby Baelrog and Grendel Broods and slew their cerebrates. Their deaths at the hands of the Dark Templar meant they could not be reincarnated.[21]

Eye of the Storm[]

With the zerg defenses weakened the protoss, joined now by Raynor's Raiders's and with the grudging approval of the Conclave,[22] launched their assault on the Overmind. The attackers managed to injure the Overmind but the defenses continued to hold and it seemed unlikely the killing blow could be delivered before the offensive petered out.[23]

The Death of the Overmind[] 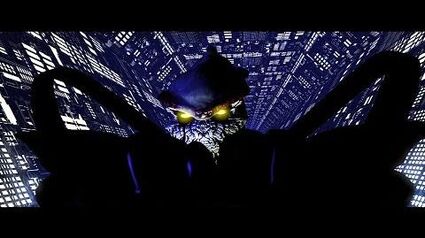 Realizing the peril of the situation Tassadar made the ultimate sacrifice. Tassadar channelled the energies of the Dark Templar and Khalai through Gantrithor. Intercepting mutalisks severely damaged the carrier but failed to stop it. The energy pulse erupting from the carrier struck and destroyed it before the rift was completed.[24]

The Overmind was dead but there was little for the victors to rejoice over. The Swarm, now leaderless, began rampaging over the smoking ruins of Aiur. The trials of the few surviving protoss were not yet over. Meanwhile, on Char, Sarah Kerrigan knew the time of her ascension had come.[25]