The StarCraft Field Manual is a StarCraft sourcebook. It is written in an in-universe perspective as a training manual for Dominion Marine Corps, taking place after the end of Heart of the Swarm and before Legacy of the Void.

A special Veteran's edition of the manual is included in the collector's edition of Legacy of the Void, which includes additional concept art for the game.[1]

Blizzard Entertainment's StarCraft saga has captivated millions of players worldwide since its initial release in 1998. A genre-defining military strategy and sci-fi adventure, gamers are drawn to StarCraft's iconic central characters, Sarah Kerrigan and Jim Raynor, and its thrilling storyline chronicling the battle between the scrappy Terrans, mystifying Protoss, and terrifying Zerg swarm.

Published in anticipation of the latest expansion, Legacy of the Void, StarCraft Field Manual draws on more than a decade's worth of lore to create an all-encompassing collector's item for fans, filling in every detail of the game's extensive tech, races, and units.

A visually distinctive, in-world overview of the entire StarCraft franchise, this unique book unveils new details about the wide range of combat forces and technology employed by each of the three primary races within the game universe. A definitive field-guide, original illustrations pair with an engaging narrative that showcases all of the vital statistics, origins, lore, and other interesting facts that have emerged in each expansion.[2]

The Tech Manual is part of a series of lorebooks designed by Blizzard Entertainment, the series having begun in its Diablo franchise with Book of Cain and Book of Tyrael. The book is written in-universe, narrated from the perspective of the Terran Dominion. Information on the tech and science of the StarCraft universe is provided in the form of diagrams and field notes from terran researchers. This includes data on protoss and zerg units. It is treated as an in-universe artifact given to members of the Dominion Marine Corps. The work has handwritten notes from a Dominion marine written on numerous pages, the notes themselves of a cynical nature.

Robert Rose provided some of the interior artwork, using his StarCraft to Scale drawings. As Blizzard did not possess their own internal charts for unit sizes, and had followed Rose's work for some time, they contacted Rose, who allowed Blizzard to use his charts in the book.[3]

The idea for a StarCraft sourcebook existed as far back as 2011, in light of the recently published Diablo sourcebook Book of Cain.[4] In the same year, Chris Metzen commented that it would be easier to do such a work for StarCraft than Warcraft due to the former's more linear story.[5] Warcraft ended up getting its first lore book in 2013.

The Field Manual was revealed in 2015. The design is built off Book of Cain, and The Dark Knight Manual. It was originally called the "StarCraft Tech Manual," and possessed a different cover.[6] 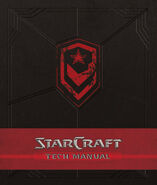 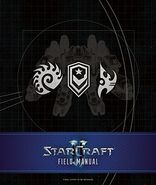