< StarCraft II: Heart of the Swarm campaign quotations
Edit
watch 02:23
Wiki Targeted (Games)
Do you like this video?
Play Sound

If arriving from Space

Having rescued Raynor, Kerrigan realizes there is no turning back. With the Swarm fully gathered, Kerrigan stands poised for the final strike against Korhal. And Mengsk.

If arriving from Skygeirr Station

The Dominion's hybrid lab has been destroyed, and Narud defeated. The time has come for Kerrigan to begin the final assault on Korhal itself...

Several zerg drop-pods fall over Korhal, but terran defenses kill most of them. One manages to reach the surface.

A few Dominion infantry units are nearby, and move in to attack.

Another drop-pod falls in the middle of a Dominion base. Kerrigan comes out of it and destroys the base with her psionic powers.

The Swarm has broken through Korhal's defenses and driven the Dominion forces into Augustgrad. Aboard her mighty leviathan, Kerrigan has gathered her generals to discuss the invasion of the Imperial sector.

The psi destroyer is in ruins, and the Swarm has endured. Zagara's troops have pushed the Dominion's forces into the Imperial sector, where the palace and Emperor Arcturus Mengsk await.

Kerrigan destroys some of the Dominon's structures.

(Cutscene)
The Hyperion descends upon a Dominion base and opens fire.

The Hyperion destroys the Dominion base and Raynor's Raiders start setting up their own base.

If the Hyperion is attacked:

The Odin is destroyed.

The palace gates are destroyed.
(Cutscene) 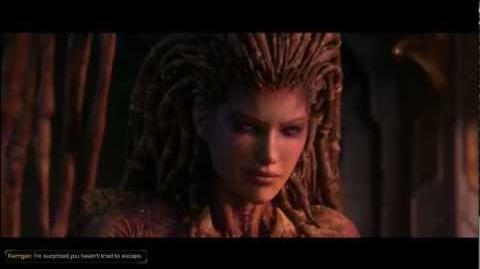 Kerrigan destroys the Dominion defenders. Mengsk watched on TV screens. Then Kerrigan breaks into his sanctum.

Mengsk activates his cigar lighter which causes a floor panel to open. The xel'naga device rises from the floor. Mengsk activates the lighter again, and the arifact blasts Kerrigan with lightning and immobilizes her to the ground.

Jim Raynor charges in and grabs Mengsk by the face.

He throws Mengsk and points his gun. The device's control has been destroyed. Kerrigan gets up and slams Mengsk into a wall.

Kerrigan kills Mengsk with her powers.

Kerrigan and Raynor look over the battlefield, standing triumphant.

She begins to float away to her leviathan.

Kerrigan is now in space.

Arcturus Mengsk is dead, and the Imperial sector of Augustgrad lies in smoldering ruins. With her thirst for vengeance finally quenched, Kerrigan has gathered the Swarm to scour the stars for any sign of the fallen xel'naga Amon.

Discover the fate of the protoss and the entire galaxy in Legacy of the Void, the final chapter in the StarCraft II trilogy.

한국어
Community content is available under CC-BY-SA unless otherwise noted.