StarCraft Universe is a full-modification of StarCraft II with gameplay based on multiplayer raid events found in World of Warcraft and the RPG elements of Diablo. The game is to be released as a series of custom maps through the Arcade on battle.net. 1-5 players can partake in these events at a time.[1]

The game is based on the premise of an alternate ending to Wings of Liberty. In this version, Sarah Kerrigan was murdered after her de-infestation, leaving the Koprulu sector without a defense against the hybrid forces of Amon. Years after Zeratul's last stand, the terrans and protoss are scattered among many worlds, living in fear of Amon's hybrid and zerg forces.

In 2523, thirteen years after the hybrid invasion, Tal'Zerash, a mysterious and charismatic cyborg protoss, begins contacting the survivors. Claiming to be appointed by Zeratul as the last leader of the Nerazim, he begins gathering the scattered survivors, intent on rallying them for a final stand against the darkness.[2]

The player can choose to play as a terran or protoss. Each race has four available classes, with the marine, medic, firebat, and ghost available for terrans, and the zealot, dark templar, high templar, and preserver available for the protoss.[3] The player character can level up over time, gaining new equipment along the way. NPCs also feature, and vehicles can be piloted.[4]

In January 2011, Winzen was calling the project World of StarCraft. Activision Blizzard removed promotional videos from YouTube, calling it a copyright infringement. Winzen replied that he would stop development of the game if that was what Blizzard wanted.[5][6]

Blizzard responded that it didn't want to stop the project and "it's looking forward to seeing development of the mod continue, and that it has invited Winzen to the company's campus to meet the game's development team."[7] Blizzard has invoked its right to block the distribution of videos promoting the mod but does not block the project itself.[8]

On February 18, 2013, Winzen and the SCU team released the "Chronicles of Fate" prologue, the first custom map in the series.

With Blizzard's approval, the project launched a Kickstarter campaign for development of the game in August 2013, with a goal of $80,000 and stretch goals up to $1 million. The campaign concluded on September 10, and successfully met its $80,000 target. A PayPal option remains for subsequent donations for the stretch goals.[9] 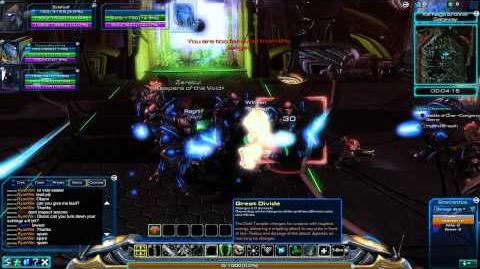 Retrieved from "https://starcraft.fandom.com/wiki/StarCraft_Universe?oldid=332945"
Community content is available under CC-BY-SA unless otherwise noted.