Edit
watch 02:34
Fire Emblem Warriors: Three Hopes - The Loop
Do you like this video?
Play Sound
"It was a small outpost: a nexus, assimilator, and a couple of gateways. Commander didn't want to risk marines against the cannons they had dug in on the cliffs so me and the boys got brought in for a little death from above. First raid, we got a bunch of them little worker probes and lit up the pylons powering the cannon. They tore us up pretty bad, though, so we headed back for repairs. By the time we came back, it'd all changed. Two big stargates were there, and protoss flyers were popping out of those big hoops like bees from a hive. We got hit every which way, and I only made it home on one engine and half a wing. Couple of minutes later, protoss air hit our base hard; I'm starting to think they only let me get away so they could follow me back..."

The stargate is an advanced protoss structure.

"Makes weird sounds when it's calling ships in. Kind of like...whooomumumumooommm..."

Stargates had been developed by the protoss prior to the Discord.[1] They are one of the most technologically advanced of protoss facilities.[2] The stargate provides a warp link strong enough to call ships to a planet's surface.[3] A large amount of electric (or similar) energy is generated just prior to the ship being warped in, showing itself visibly.[4] The process of warping in requires a vast amount of energy, and the stargate's excess light emissions can be witnessed from vast distances.[5] It also produces a sound when calling ships in. The range of which it can warp in ships has a limit, but the exact range has yet to be determined by the Terran Dominion. However, it is known to be in the range of light years.[6]

The warships of the protoss fleet require a much stronger warp link in order to materialize than a standard gateway can provide. The immense stargate is capable of calling ships from high orbit or across immense distances to appear on a planet surface. The construction of one or more stargates at a protoss base is a sure sign that it has become a major staging point for an offensive.[7]

Tal'darim stargates are elongated to allow newly summoned ships to accelerate out of the bay directly onto the field of battle.[5]

The stargate is the production building for protoss combat air units. Although it is a floating structure in the concept, it requires an area to construct and ground units cannot go underneath it.

In the StarCraft beta, the stargate was originally known as the nexus.[8]

The stargate has an unused selection sound.[9]

Mastery: +12 sp per Structure Health and Shield mastery point. Up to a maximum 960 (Co-op Karax)

When a stargate summons a unit, a shimmering silhouette of that unit appears within the stargate.

Stargates haven't been used by protoss players much over the course of Wings of Liberty, but Blizzard hopes to change this via the introduction of the tempest.[10]

Artanis, Vorazun, Karax and Fenix are able to build stargates in Co-op Missions. At Level 8 Artanis acquires the talent Warp Harmonization, transforming his stargates into warp stargates. They also benefit from the Superior Warp Gate talent, allowing Artanis to warp in multiple units from a single stargate.

Allows Artanis to warp in tempests from the stargate. Requires a fleet beacon

Can attack ground and air units.

New animations were developed for the stargate, which would reflect the unit being summoned.[11] 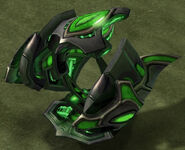 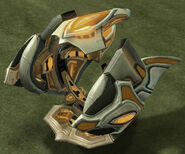