The sunken colony is a zerg structure that protects their hive clusters against ground-based attacks. Rooting itself deep into creep[1] via rows of sharp teeth[2], the colony grows multiple tendrils that it can use to attack any enemies that come within range[1]. The impaler colony, a creation of the Overmind, was the ancestor of the sunken colony.[3]

By the Second Great War, the sunken colony was a defunct structure[4]. However, a number of sunken colonies were present on Aiur during the End War.[5]

Sunken colonies deal explosive damage. This makes them more potent in the later game when higher tier medium- and large-sized units appear. The colony has a slower rate of fire than the photon cannon which further reduces its effectiveness against small units, which tend to appear in larger numbers. On the other hand, the colony is much more durable than the photon cannon.

The total cost of a sunken colony is 175 minerals, including the cost of the drone.

The sunken colony's sprite appears to be a modified version of the nydus pit's sprite.

Earlier in development, the sunken colony's sprite was named "lurker".[6]

Sunken colonies appeared in at least one mission in StarCraft: Ghost, alongside spore colonies. Nova was tasked with painting them for siege tanks.[7]

Heart of The Swarm[]

Sunken colonies appear under the name "Impaler colony" in the Hydralisk evolution mission during the Heart of the Swarm campaign. They are introduced there as ancestors of the sunken colonies of Starcraft 1, and their essence would allow Hydralisks to evolve into Impalers.

Sunken colonies appear as a zerg defensive structure during "The Host" during the Legacy of the Void campaign. It uses the model and animations of the impaler colony.[5]

The sunken colony has been replaced by the spine crawler.[8]

The sunken colony had reappeared in StarCraft II as a mobile queen-produced defensive structure. In its mobile form, it had fewer hit points.[9] 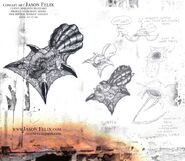