Supernova is a StarCraft II: Wings of Liberty mission. Raynor's Raiders tried to collect a xel'naga artifact before both they and it were terminated by an imminent supernova.[1]

At the beginning of the Second Great War, Raynor's Raiders was hired by the Moebius Foundation to retrieve the pieces of the Keystone (secretly for Crown Prince Valerian Mengsk).[2] The Foundation directed the Raiders to Typhon XI and the fourth component. The Tal'darim anticipated the move from previous encounters and were already dug in around the component when the terrans arrived.

The operation assumed even greater urgency when the output of the local star jumped five hundred percent as a prelude for going nova. The planet surface was already being affected by massive firestorms. The Raiders had mere hours before the stellar event.[1]

The Raiders cleared an initial base location with newly acquired Banshees. The terrans realized they could use their mobile structures to keep ahead of the firestorm. A large supply cache was established planet side precluding the need for supply depots.

Once again the Tal'darim failed to stop the terran intruders.[1]

"Sir! Dominion ships warping in! Mengsk's flagship is leading them!" 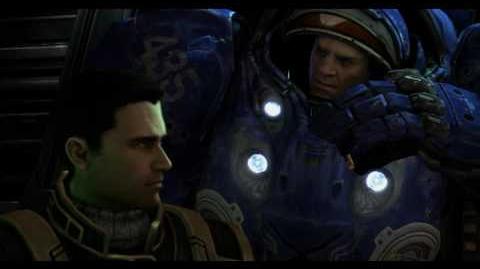 Raynor's Raiders kept a scheduled rendezvous with Moebius Foundation after Typhon XI. They were surprised to be met by Dominion battlecruisers, led by the imperial flagship Bucephalus. The Dominion ships took no hostile action, but Commander Jim Raynor ordered the Hyperion to latch onto the enemy flagship for a boarding action. Raynor expected Emperor Arcturus Mengsk to be aboard. However, having fought through the defenders, Raynor was surprised to confront the Emperor's son, Valerian, instead. The prince revealed his ownership of the Foundation and offered an opportunity to save Sarah Kerrigan.[2]

Valerian explained the fragments formed a device capable of reversing Kerrigan's infestation.[note 1][3] Raynor accepted Valerian's offer for an alliance. Captain Matt Horner and Tychus Findlay feared Raynor's personal feelings were leading them into a Dominion trap.[4][5][6] These concerns were shared by other Raiders[4][7] and doubts on Raynor's leadership began spreading.[8]

The environment hazard is the sea of flame advancing from the left side of the map. Units caught by the wall of flame will take 10 damage per second regardless of armor. Use Lift Off to move key structures to safer locations. 200 supply is automatically provided so supply depots are not required.

On normal difficulty, the enemy has few air-to-air units and detectors are limited to mainly static photon cannons. Prioritize the photon cannons to give cloaked banshees total freedom.

On hard and brutal difficulty the Tal'darim bring air-to-air units against you including scouts, phoenixes, and carriers that will chew up your banshees, along with high templar with psionic storm, and observers to see them, making vikings and other anti-air units much more important. If you have the ability to make science vessels, a couple of them to repair the mechanical units will come in handy. Merc camps cannot be lifted off and will get burned in the advancing fire, but are cheap to build, and the viking mercs are recommended. If you have orbital command, this map is a good time to use MULEs to quickly harvest minerals, leaving your SCVs to get gas; the MULEs can also be used to garner the Protoss relics.

The Tal'darim base northwest of the starting position may be destroyed with 8-12 Banshees. Destroying the nexus leaves a resource cache. This can be useful since the emphasis is on building units rather than making a robust economy.

In spite of the mobile nature of the map, the Tal'darim will come at the player with attack waves on harder difficulties. Ensure that the base is not caught off guard, as immortals can devastate the player's production structures before they can pull back their army to react. Thankfully, immortals are vulnerable to banshees.

The mission consists of steadily moving right while destroying Tal'darim bases, thus providing new areas to establish a base ahead of the fire. The player will be prompted to destroy the base in the center of the map by Horner, and the next base to the southeast will be the most convenient after that. The goal is to assemble a large force during the move eastwards, enough to assault the main base on the east side of the map. The archives are heavily defended; attacking it will spur all the remaining Tal'darim in the area to rush to its defense, so make sure to scramble enough forces to punch through.

Starcraft 2 Supernova - BRUTAL Guide - All Achievements!
Add a photo to this gallery

Retrieved from "https://starcraft.fandom.com/wiki/Supernova?oldid=379662"
Community content is available under CC-BY-SA unless otherwise noted.