Start a Wiki
"Last, but not least, is the spawner of the swarm: the Swarm Host. These guys can create numerous pesky locusts and now, we know how. So check out all the details, and arm yourself and those around you with an understanding of one of our greatest foes."

The swarm host (otherwise known as the "egg monster" by terrans)[1] is a zerg strain in StarCraft II: Heart of the Swarm.

Generated by the infestation pit, the swarm host burrows into the ground in order to provide a seemingly endless supply of locusts.[2] A single swarm host is capable of overwhelming an entire army.[3] The large, mushroom-shaped structure on the swarm host's back is a breeding ground that weaponizes the millions of diminute larvae inhabiting the creature's acidic bloodstream. Through a simple system of membranes for matter exchange, glands that pump the offspring full of hormones to hyper-accelerate growth, and ducts for efficient transportation to the bubbling pockets on the surface of the incubator, the swarm host births deadly, short-lived locusts to destroy threats to the Swarm. The larvae also feed on damaged tissue, sealing wounds, and destroying anything foreign that enters their domain. When the creature is threatened or engaged in combat, a subtle chemical reaction signals the larva to head for the incubator, where they are evolved into living weapons.[4]

The swarm host is often used in defensive maneuvers.[2] Its legs boast powerful muscles that allow them to vibrate at hypersonic speeds, not unlike the teeth of the nydus worm. Despite that, the creature couldn't burrow fast enough to adapt to shifting battlefield conditions. To correct this, a set of fragile (albeit regenerating) capillaries was put into place. Now, when the swarm host digs, the capillaries break and the creature's acid blood softens the soil, allowing it to go underground in seconds. Flexible osseous structures of varying thickness slide and lock into position when the swarm host prepares to strike. Bearing a resemblance to siege tank hydraulics, this specialized skeletal system allows the swarm host to maintain position and balance when spewing locusts or when under heavy fire.[4] The swarm host lacks mobility however, which leaves it vulnerable to quicker enemies with area damage like the hellion.[2]

The swarm hosts of the Leviathan Brood are uniquely specialized for amphibious assault and bear many genetic advantages that allow them to quickly move through the oceans and assail their prey.[3]

Projenitors of the swarm hosts, named primal hosts, were first encountered by the Swarm utilized by the primal zerg on Zerus, used against Kerrigan's forces by the pack leader Brakk.[5] Swarm host strains were incorporated into Kerrigan's Swarm soon afterwards by Abathur, adapted through primal essence.[6] The essences of the primal host were later adapted in to create the swarm host.[3]

Reports within the Terran Dominion have suggested that swarm hosts have developed the ability to spawn locusts without being burrowed.[1]

As primal zerg fought alongside the Zerg Swarm, many swarm hosts strains began to merge with their primal host progenitors, creating strains with many similar traits between the two.

Swarm hosts enslaved by the Cerberus Program were enhanced with microfactories that allowed them to control locusts spawned from them with remote controlled head gear.[3]

During the End War, a number of swarm hosts came under Amon's control, and were inducted into his brood. They were destroyed by Tal'darim Highlord Alarak and Nerazim Matriarch Vorazun on Aiur.[7]

Legacy of the Void
Co-op Missions

Swarm hosts cannot attack directly, and summon locusts to fight for them. A swarm host can summon two locusts at a time.

As of Legacy of the Void, swarm hosts can produce locusts on the move;[8] this ability is now manually activated.[9] These locusts are more powerful but do not spawn as quickly. In the late game the locusts can fly[8] over terrain. The locusts must then "swoop" to attack.[9]

Swarm hosts require the burrow ability to be researched for them. They no longer collide with locusts.[10]

Allows locusts spawned by swarm hosts to fly. Flying locusts can use Swoop to land and attack units.


Automatically available in Legacy of the Void.

Swarm hosts appear as primal zerg enemy units in "Waking the Ancient."[5] Afterwards, the player gains access to them in "The Crucible."[6] They have access to a number of upgrades in the evolution pit.[11]

In the Heart of the Swarm campaign, swarm hosts function differently. They do not burrow, instead using the root command. While rooted, a swarm host cannot move but is still visible. They do not autocast spawn locusts in the same way as in the multiplayer game. Instead, they only spawn locusts, while rooted, when an enemy comes into range, or the player selects spawn locusts and clicks a location.

Locusts can attack both ground and air units.

Abathur is able to mutate swarm hosts in Co-op Missions. He is able to upgrade them when he reaches Level 9. Dehaka is able to create primal hosts, which are able to evolve into creeper hosts at Level 8.

Spawns 2 locusts with timed life at target point. Can be set to autocast.

Swarm host can burrow to any visible location on the map.

Locusts can attack both air and ground units.

The swarm host[12] was expected to be available in the campaign and map editor of StarCraft II.[13] During Heart of the Swarm, the design was revisited, but it was initially of a flying unit much like a overlord with the ability to land, burrow, and produce "swarmings." This was scaled back to a ground based unit.[14] The idea behind its current design was to give zerg players their own siege unit, but make sure it functioned in a different manner to the siege tank or colossus.[15]

The swarm host's Summon Locust ability changed dramatically in April 2015. The ability is now manually cast with the hotkey "C", and the cooldown increased to 60 seconds. It can be used whether the swarm host is burrowed or not.[16]

The swarm host's current form was to give the zerg a new aesthetic, something to distinguish the unit from the usual claws and teeth that other zerg units possess.[17]

"Egg monster" and "digester" are terms used for the swarm host in the beta files of Heart of the Swarm.[18]

Swarm hosts' move speed was reduced to 3.15, in order to increase the number of counter-play options against them.[19]

Swarm hosts appear as a boss mercenary on the Warhead Junction map of Heroes of the Storm.[20] 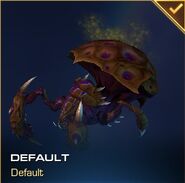 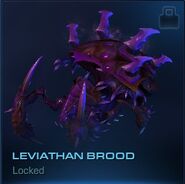 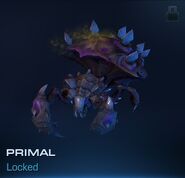 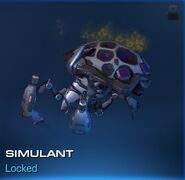 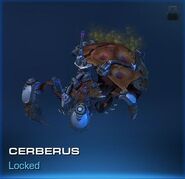 Cerberus swarm host
Add a photo to this gallery

Cerberus swarm host portrait
Add a photo to this gallery

Retrieved from "https://starcraft.fandom.com/wiki/Swarm_host?oldid=356201"
Community content is available under CC-BY-SA unless otherwise noted.