The idea of adding the "Tauren Marine" was from Sean Walker from Michigan who, after playing a beta of Starcraft II with his accomplice, Kris Gauthier, they developed and programmed the character as a prank and easter egg. After exclusive interview with the two creators, it was discovered that the actual unit was never supposed to be inducted into the final game.

It is available as a player portrait for those that bought the StarCraft II: Wings of Liberty Collector's Edition. 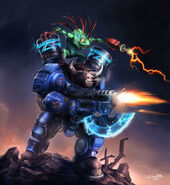 Retrieved from "https://starcraft.fandom.com/wiki/Tauren_marine?oldid=148864"
Community content is available under CC-BY-SA unless otherwise noted.