The tauren marine was an April Fool's joke pulled off by Blizzard Entertainment, and a common easter egg in the StarCraft II games. It was portrayed as a terran unit in StarCraft II.

Following the defeat of Amon in the End War, many tauren marines settled back into their peaceful, hunter-gatherer ways. They regularly celebrated the season of life, giving rewards to all who would celebrate with them.[2]

5
The tauren marine first appeared as uncontrollable an easter egg in Wings of Liberty and only usable through the map editor, but is controllable by the player in the mission Templar's Charge in Legacy of the Void. If the player moves the platform in the directions Up, Up, Up, Down, Down, Left, Right, Left, and Right from the starting spawn point, pressing the appeared "Do not push" button on the command card, his drop pod will fall down into a nuclear blast, killing any units on the platform, where a radiation symbol can be seen indicating the ground zero. The tauren marine has the unresearched ability to stimpack during this mission. This script can only be activated once in each campaign.[3]

The idea for tauren marines stemmed from a piece of promotional artwork by Samwise Didier for the band Level 80 Elite Tauren Chieftain. This sparked the interest of Phill Gonzales and he began modelling a tauren marine unit in his free time. He was given permission to use it for an April Fool's joke, and things took off from there.[4]

Tauren marines were trained from the mulgore, taking on the role of shock troops. In a video of them on the official StarCraft II website, they displayed splash damage, and a group of five of them were seen completely devastating a small terran base.

A tauren marine appears in the StarCraft II: Wings of Liberty mission, Zero Hour, as an Easter egg. It disappears into an outhouse. Selecting the outhouse several times will cause it to liftoff.[5] Another appears in the secret mission, "Piercing the Shroud", in the bottom left corner of the room with the brutalisk.[6]

The Tauren Marine appears controllable in the Legacy of the Void mission Templar's Charge, if the player moves the platform Up, Up, Up, Down, Down, Left, Right, Left, and Right from the initial spawning location. He will appear in the nuclear blast, and has the same stats as his map editor version.[3]

The tauren marine appears in a television commercial in StarCraft II: Wings of Liberty story mode.[7]

One named L80ETC appeared in early builds of Heroes of the Storm.[8]

The tauren marine is available as a player portrait for those that bought the StarCraft II: Wings of Liberty Collector's Edition. 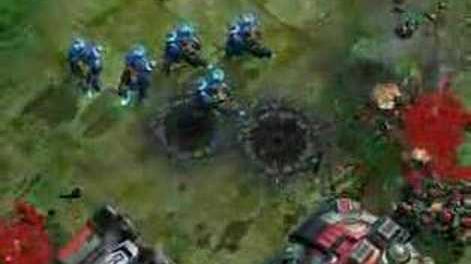