The tech lab is a terran add-on in StarCraft II. It allows attached production structures to build advanced units, and provides some upgrades for those units.

A structure may not be attached to both a reactor and tech lab simultaneously.

Once combat buildings are established, small tech labs are built alongside them to undertake research and development work. Some of this work can be dangerous, but it is seen essential to the war effort.[1]

The tech lab took over from a number of Great War predecessors, including the machine shop and control tower in producing units, as well as the physics lab and covert ops research addons for the science facility.

When medics are available, the tech lab provides the advanced facilities needed to store their medpacks. During the Second Great War, Remedius Medical Systems developed a medpack storage facility that could be placed within a barracks without the need for a tech lab. (With the use of a reactor, this enables medics to emerge twice as quickly from the barracks)[2]

At the midpoint of the Second Great War, the research of Redell Quinton at Project Blackstone did away with the latrine inside factories, allowing technology from the tech lab to be stored in the core factory structure, which gave siege tanks the ability to be manufactured with the ability to go into siege mode without further battlefield research.[3]

This structure can create a tech lab.

Increases the hit points of marines by 10. The marine model changes to have a shield attached to the left shoulderguard.[4] The M98 combat shield is composed of 30 mm of bonded carbide.[2]

Reduces the time Activate Mine takes to burrow the widow mine from 3 seconds to 1 second.

Increases the starting energy of the Raven by 25.

Tech labs only serve to allow the player to build the more advanced units. Upgrades that are normally researched through the tech lab in melee games are instead researched in the armory on the Hyperion and some are already pre-researched (such as the banshee's cloak and the siege tank's siege mode).[2]

Combines the tech lab and reactor into one add-on.[5]

Protoss plasma shields have finally given us the ability to fit the tech lab and the reactor into a single structure add-on. This new add-on, known as the tech reactor, replaces the old tech lab and reactor add-ons, and allows us to train two of any unit type simultaneously.

This all-in-one safety system automatically dispatches robotic drones to put out any fires and perform basic repairs on damaged structures. Although these drones are effective at doing basic repairs, they do not have a strong enough AI to perform the more delicate repairs needed to restore a structure past half life.[2]

The various Terran commanders have a number of unique upgrades available to them at the tech lab. Swann get tech labs upgraded to tech reactors after reaching level 10. Stukov is able to build infested tech labs for his production structures. Han and Horner have access to a special tech lab that is constructed at the start of the match, attached to the Dominion starport and giving upgrades to Horner's units. It will rebuild upon being destroyed.

Marauder attacks slow the movement speed of non-massive enemy units by 50% within a radius of 2.

Increases firebats base armor by 2 and base HP by 100.

Allows vultures to construct new spider mines. Vultures cannot hold more than three mines at a time. Can be set to autocast.

Increases the detonation and trigger radius of spider mines by 33%.

Allows thors to use the 330mm Cannons ability, stunning all units in a small area and dealing 500 damage in a larger area over time.

Increases the damage of the cyclones Lock-On by 100%.

Wraiths evade 20% of incoming attacks and move 20% faster when cloaked.

Science vessels can use the Defensive Matrix ability. Targeted friendly unit gains a shield that absorbs 200 damage before falling.

All buildings will initiate auto-repairs when below 50% health, repairing them back to 50% health (restore 15 hit points per second).

Combines tech lab and reactor add-ons, allowing two units of any type to be trained simultaneously.

Increases elite marines movement and attack speed by 50% and heals them 2 life a second for 15 seconds. Can be set to autocast.

Increases elite marines vision by 2 and attack range by 1.

Marauders gain a secondary attack that does 90 damage every 30 seconds. Can be set to autocast.

Marauder commandos attacks reduce enemy attack and movement speed by 50% within a radius of 2 of the impact. Reductions on heroic units are 20%.

Deals 100 shield damage and drains energy of all enemy units in area of effect. Also reveals cloaked and burrowed units for 10 seconds.

A Hellbat ranger leaps towards enemy ground units and stuns an enemy for 2 seconds. Grants the hellbat ranger +4 armor for 5 seconds. Can be set to autocast.

Increases the siege tanks range by 1 every three seconds while in siege mode, to a maximum of +5 range.

Deals 75 damage to ground units in an area of effect. Can be set to autocast.

Liberators can attack structures while in defender mode.

Raven Type-II can store two additional charges for its abilities.

Increases healing rate of Bio-Mechanical Healing Drone by 25% and cloaks units being healed by it.

Upgrades research time and resource costs are halved. Does not affect weapon and armor upgrades.

Asteria Wraiths attack speed increases by 10% with each attack, up to a maximum of 100%.

Deimos Vikings in Fighter Mode can launch 5 rockets at an enemy. Each rocket deals 25 (+15 vs armored) damage to the target unit. Can be set to autocast.

Attacks from Deimos Vikings in Assault Mode pierce, dealing damage to enemy units behind the target (deals area damage within a length of 7 and a width of 3). Deimos Vikings transform time is reduced by 75%.

Theia ravens can target up to 4 units with Analyze Weakness.

Asteria Wraiths, Deimos Vikings, and Theia Ravens can use Tactical Jump, warping them to any location, even if not visible. The aircraft is invulnerable while warping. 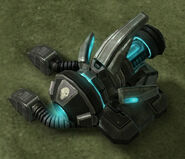