Edit
watch 02:46
The Quarry - The Loop
Do you like this video?
Play Sound
"Kinetic matrix active."

The protoss tempest is a unit that was introduced in StarCraft II: Heart of the Swarm.

"Nothing a little determined firepower can't crack. If you can get close enough."

An immense capital ship,[1] the tempest was developed by the protoss after the first phase of the Second Great War in order to maximize the effectiveness of their war machine against their enemies,[2] specifically dealing with the long-range weaponry of the zerg and terrans.[3] They stand as one of the most powerful warships in the protoss arsenal.[4] However, tempests can still be brought down with focused fire, in the event of their enemy getting close enough to engage them.[1]

The tempest's large thrusters generate enough drive to displace the vessel's considerable mass, and are designed to take advantage of the immense power output of the ship's kinetic matrix. Phase-smiths fitted the tempest with sophisticated stabilization technology to prevent energy fluctuations that could jeopardize the integrity of the ship when firing its primary weapon.[5]

Upon first seeing the tempest in combat, the Tal'darim, in a rare case of being impressed by the Daelaam, vowed to seize them for the Death Fleet.[6] By 2506, tempests had been incorporated into their arsenal.[7] Tempest of the Ihan-rii have a stone surface that enhances their ability to focus the incredible output of their kinetic matrices.

After the End War, experimental phase-smiths inspired by the Golden Age of Expansion created customized tempests with high-sheen ornamental plating that could withstand the destructive energies of the vessel's kinetic matrix.[6]

- A Dominion marine, in regards to the point of kinetic matrix formation.(src)

The cockpit of the tempest is specially shielded, situated in a position where it overlooks the vessel's primary weapon. With this device, tempest pilots build up volatile energies in the kinetic matrix that powers the tempest, then propels the energy through the ship's hull[3] routed through the multiple resonators, coils, and amplifiers housed in the claw-like fore of the ship. This, fused with a contained sphere of highly charged particles, can then be launched at distant targets. The resulting projectile, while unstable[5] and slow moving,[1] may be launched over great distances to soften up enemy forces or deal with defensive emplacements before protoss armies engage in battle.[5] In this regard, tempests are often situated behind protoss shock troops. The matrix's range is so large that it actually exceeds the radius of the tempest's sensors. Thus, tempests sometimes need spotters to reveal faraway targets.[1]

The fanatical[3] tempest pilots must make adjustments to ensure each blast is cohesive enough to reach the target. They also regulate the energy flow from the kinetic matrix to prevent catastrophic overloads which could compromise or destroy their ship. The power coursing through the tempest's hull is so monumental that its pilots must wear bulky dampening armor to withstand it.[5]

At the close of the End War, Phase-smith Karax developed tempests that were integrated into the purifier data web, allowing them to be flown remotely. This allowed them to be outfitted with advanced disintegration weaponry at no risk to protoss pilots.[8] Their heavy armored plating made it the pride of the Purifier fleets.[6]

Purifiers (Legacy of the Void)

Heart of the Swarm (Versus)

40 (+40 vs structures with Tectonic Destabilizers) (Versus)

The tempest has very long-ranged ("siege") weapons, for both anti-air and anti-ground.[9] The tempest does low damage for its cost, which is intentional—it is very much a support unit meant to be used strategically rather than a core combat one. It is good at enemy harassment and forcing the enemy to come into the range of core protoss units.[10] However, the tempest's strength lies in its ability to deal extra damage against enemy aerial "massive" units, like such as the battlecruiser and carrier. A pair of tempests can make short work of any of these units, as they can effectively outrange and flank them without the risk of retaliation.

With Patch 3.7, the Tempest gained the Disruption Blast ability which could stun enemy ground units and structures for seven seconds. This ability was removed in the subsequent balance update.[11]

Tempests are vulnerable to mass Vikings, Corruptors and Void Rays. Recent balance changes have made them far deadlier against massed Spore Crawlers but more vulnerable to Thors.

Improves the Tempest's Resonance Coil to deal +40 damage vs structures.

In the single-player campaign of Legacy of the Void, the tempest is one of three capital ships the player can use, along with the carrier and mothership. The tempest retains its powerful long-range attacks, making them more useful for kiting enemies than a frontal assault like the carrier and mothership. The tempest also gained a Disintegration ability that deals heavy damage over time, effective for striking targets of opportunity. However, it's attack is exclusively single-target and slow, making it unsuitable for taking on swarms of lighter units.

Tempests are exclusive to Artanis in Co-op Missions, unlocked once he reaches Level 11.

Deals 500 damage over 20 seconds to target enemy unit or structure.

Valorous Inspirator: Increases the Disintegration damage from 500 to 1000. 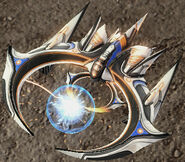 Purifier tempest in Legacy of the Void campaign

Purifier tempest portrait in Legacy of the Void campaign