The templar archives are dark, mysterious buildings that serve as training centers for the legions of both the high templar and, during the Brood War, the Dark Templar.

The high templar, charged with wielding the psionic powers of their race, used the archives to access memories and strands of experience from the Khala[1] and thereby gain knowledge inaccessible to ordinary warriors.[2]

With the corruption of the Khala during the End War, the archives fell silent, the memories of the Khalai's ancestors lost to them.[3]

The high templar selects a unit, creating two duplicates of it. Hallucinations appear with a blue tint to the creating and controlling player, while all other players will see them as duplicates of the original. Hallucinations do not inflict damage when they "attack", may not cast spells, or produce units (important for hallucinated carriers and reavers), and take double damage from all attacks. Hallucinations last for a limited time and automatically disappear when hit by spells (eg. EMP shockwave, Mind Control).

The high templar can create a storm of raw psychic energy. This is achieved by one closing their mind to the outside world, sending out psychic "ripples" that are disruptive to other lifeforms.

Inflicts 112 damage to all units within a target area over seven seconds. The storm does not harm structures or units within bunkers. Psionic storm ignores armor and armor types.

It does not prevent units from moving into or out of the affected area. Only one storm may affect an area at a time; overlapping storms does not increase damage output.

See below
The templar archives in StarCraft II is a requirement for producing high templar in addition to providing upgrades such as psionic storm. It no longer provides the ability to summon dark templar; this has been moved to the dark shrine.

Psionic Storm deals 80 damage in the target area in small packets over 2.85 seconds, and hits both air and ground units. It injures friendly units caught in the area of effect of 1.5.[6]
Psionic storm is smartcast.
Psionic Storm is subject to a short delay before striking; during this brief period there is a visual indicator for where it will strike.

The templar archive is available to be built in the Legacy of the Void campaign, allowing for the production of high templar dark archons and ascendants.[7]

The templar archives is available to Artanis and Alarak, though the latter's is named "ascendant archives" and has a different skin. Artanis's archives allows the training of, and houses upgrades for, high templar, while Alarak's does the same for his ascendants.

Power Overwhelming: +50 damage per Sacrifice. Up to a maximum 700

Increases range of Psionic Orb by 25%

The ascendant permanently gains +100 max shields and +25% ability damage each time it uses Sacrifice. Stacks up to ten times.

The ascendant's appearance changes slightly each time, but an icon appears when the ascendant is selected.

The Khaydarin Crystal Amulet upgrade was removed as of patch 1.3.

The templar archives didn't change very dramatically during the development of StarCraft II. Aside from some texture polish, it shipped in the final game unaltered.[8] 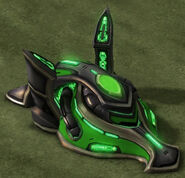