Edit
watch 03:01
Wiki Targeted (Games)
Do you like this video?
Play Sound
"All your base are belong to us."

The Whole BLASTED Base!

The terra-tron is an April Fool's joke from Blizzard Entertainment. It is also the final boss of The Lost Viking.

The titanic terra-tron is designed as the omega supreme defense for high priority regions, such as the mineral-rich uplands of Redstone. Structures fly into position and attach to each other with the aid of magnetic flux generators to form the massive siege-class combat walker. It is armed with at least three different kinds of weapons (an arm sawblade, hand-mounted energy cannon and head-mounted guns) and can "launch" reapers.

The cost of operation is aggravated by damage to energy conduits and pipes, and the exposure of electrical wiring, steel framework and sewage systems. Continued development is expected to eliminate these issues.[1] 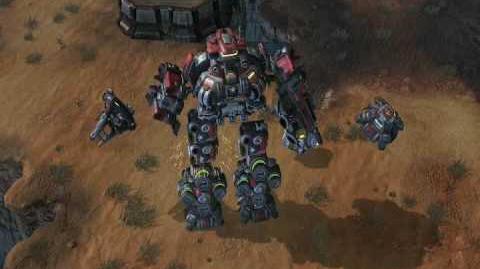