Edit
watch 04:03
Wiki Targeted (Games)
Do you like this video?
Play Sound

The Outlaws is the second mission of StarCraft II: Wings of Liberty. 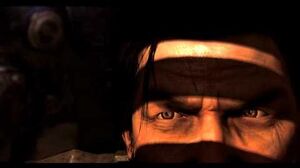 After exchanging friendly barbs, Findlay offered to act as a middle man between the Raiders and the Moebius Foundation who were buying alien artifacts. The ex-convict revealed Dominion activity on Mar Sara was driven by a dig for such an artifact and it was almost ready to be shipped out. Raynor agreed to raid the dig site and steal it.[2]

Assault on the Dig Site[]

The Raiders established a base near the objective. Mar Saran rebels had established another base independent of the Raiders, but were engaged by the Dominion. Raynor wanted to help the rebels while Findlay was content to let the rebels draw away enemy attention.

The Dominion outpost was destroyed and the dig site secured. The Raiders' adjutant gained control of the dig site's crane and brought the artifact to the surface.[1]

The Raiders took the artifact back to Backwater Station for transport off world.[3] Most civilian casualties during the raid were apparently caused by overzealous Dominion troops. Emperor Arcturus Mengsk held a press conference where he justified the policy against the trade in alien artifacts on public safety grounds.[4]

This is the first mission with a controllable base.

Use the starting marines to scout the surrounding. To the north are resource pallets, with enough resources to build a second barracks; on Hard difficulty and above the pallets are guarded by marines and a War Pig.

Build a tech lab to unlock medics, train more infantry, and attack toward the besieged rebel base in the south-west corner. On harder difficulties, the rebels may be overwhelmed by the Dominion without help. Reaching the rebels provides controllable reinforcements in the form of surviving rebel units and buildings, including a barracks. The rebel base also has several resource pallets.

The enemy base in the north-west corner. Approaching it triggers an attack by defending hellions. In Hard difficulty, there is a Devil Dog in the base. On Brutal, there is a siege tank in siege mode in the base. If units are brought into melee range of the siege tank, it will turn into tank mode and not turn back into siege mode, so sending a small force to intercept the siege tank may save vital marines in the main force. Alternatively, lifting off a building and landing it next to the siege tank will cause it to un-siege.

The mission was formerly called "The Dig". Another mission was given that name instead.[5]