The Reckoning is the final mission of Heart of the Swarm.[1]

Augustgrad was defended by three strong-points preventing zerg forces from entering the city from the outside, although Sarah Kerrigan and her own zerg had already entered the city, along with the Hyperion and Raynor's Raiders.

Powerful Dominion defenses such as Sky Fury Squadron, Pride of Augustgrad battlecruisers and the Odin, plus groups such as Alpha Squadron and Sons of Korhal marines were present to defend Mengsk's Palace from the zerg.

Kerrigan's forces were able to destroy the three main Dominion entrenchments, which subsequently enabled Zagara, Dehaka, and Alexei Stukov to send their own troops into the city to reinforce Kerrigan.

The joint zerg-Raider forces were able to fight their way to Mengsk's Palace where they shattered the palace gates. Kerrigan entered it alone to deal with Mengsk.

A few minutes into the mission, the Hyperion will fly in and destroy a light Dominion base to the north, Raynor's Raiders will set up an outpost and launch regular attacks against the Dominion. The location is moderately well-defended, but the player will need to be ready to help defend the Hyperion if the base is hit. If the ship is destroyed, the mission is lost. The player is vulnerable to attack from the north and the east, while the west path to the Hyperion is clear.

Mengsk's forces consist of every unit the terrans have access to in the campaign, and they are stronger than the normal terran forces, using the models of mercenary-type units and having all-around higher stats similar to them. Mengsk will send strike forces against the Hyperion during the mission, and the player will need to help Raynor defend his forces. After approximately 22 minutes have passed, Mengsk will send the Odin against the Hyperion, likely in the company of many other units. The player should bring a large force of units to help Raynor bring it down. The Odin will be the last focused attack Mengsk makes, though attacks by his normal units will continue.

Mengsk controls much of the map and his forces are numerous, so the player should move out in large numbers when they attack, and have several hatcheries to quickly replace their army. East of the player's starting base is a Dominion base, it should be cleared out early so the player can expand. A third expansion lies in the near center of the map, behind more Dominion forces. The player must use their units wisely and micro carefully - use ultralisks to draw fire then send in more fragile units, combine air and ground forces, and pick evolutions that allow the army to synergize well. Kerrigan's abilities are particularly helpful for bringing down large numbers of Dominion defenders and clearing the way for the more fragile zerg. Infestor's neural parasite is especially useful on taking control of the enemies strongest units especially the powerful battlecruisers and thors. For attacking the enemy

Slowly but surely the player must push Mengsk's forces back until they arrive at his palace. The palace is the most heavily defended spot on the map with planetary fortresses and numerous defending units, and as the player reaches the palace drop pods of reinforcements will arrive as well. Destroying the palace gate ends the campaign.

As optional objectives, throughout the city the player can find gates blocking Kerrigan's allies. Destroying the Dominion defenders at these gates lets the rest of the swarm into the city. The north-west gate has Stukov send infested marines and aberrations, the southern gate has Zagara send zerglings and banelings, and the south-eastern gate has Dehaka send primal zerg. When the gates are first broken they will send a massive number of troops, and for the rest of the mission send smaller numbers in waves.

For the achievement "Speed Bump," the player should tunnel vision on the central base and attempt to focus down the Odin, spending the majority of the beginning building up and defending attacks instead of taking out the defenses on the way. Once the player is maxed, they can push in and destroy the Odin while it's in the capitol.

Starcraft 2 THE RECKONING - Brutal Guide - All Achievements!
Add a photo to this gallery 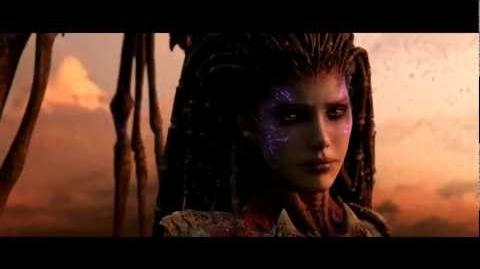 Retrieved from "https://starcraft.fandom.com/wiki/The_Reckoning_(Heart_of_the_Swarm)?oldid=370875"
Community content is available under CC-BY-SA unless otherwise noted.