Start a Wiki
watch 02:27
The Loop (Games)
Do you like this video?
"A massive mechanical human-shaped robot that protects its pilot while it wreaks destruction in its path, the Thor is a master of devastation whether on the sky, or on the ground. With the survivability of a pile of rocks, you can always count on a Thor to take to the front lines and make a big ol' mess out there."

The thor is a huge and powerful terran mechanical siege walker. Despite the thor being smaller than the Odin, the thor is still heavily armed and armored, and known to be one of the most heavy and powerful mechanical units in the Dominion Armed Forces.

"These Thors are smaller than the Odin but they handle better -- and they still hit hard."

Named after the Norse god of thunder,[1] the thor is a class of siege-walker.[2] Those in service during the Second Great War were more maneuverable than the Odin incarnation.[3] Pilots of thors were referred to as "controllers."[1]

"This siege-walker may not be unstoppable, but it is undoubtedly close."

Heavy composite neosteel-ceramic armor protects the thor. The plates are modular and can be replaced easily if damaged, or exchanged for thicker versions depending on battlefield conditions. Designed to defeat high-explosive armor piercing rounds, as well as disrupt the searing beams of energy-based weapons, the thor's plating offers unparalleled protection to the pilot and the mech's internal systems. Its innermost layer has a heat-resistant kinetic mesh that prevents damage from shrapnel, slugs, or even sheared armor fragments.[4] ATVX has also developed an "immortality protocol," allowing a thor to repair itself in the field as long as its hull remains intact.[2]

The thor's cockpit is pressurized and protected by a military-grade steelglass canopy, as well as thick layers of composite neosteel-ceramic armor. At its center lies the pilot's seat, which helps prevent operator injuries through powerful inertial dampeners and a foam-padded six-point harness. Multiple gauges and screens monitor the mech's systems, and the main holographic display projects computer-generated imagery of the terrain. Were this screen to fail, the steelglass canopy has a fully integrated heads-up-display, a navigation screen, and a basic targeting system.[4]

Improving the Thor has become somewhat of an informal competition amongst Terran Dominion engineers. The Dominion's top brass is content to allow this trend to continue, as it results in more powerful siege walkers. Meanwhile, improvements in neosteel plating and innumerable upgrades made the thors of the Dominion Special Forces a signature achievement in weapons engineering. The Knights of Tyrador designed a thor variant with plutonium coating that deflected projectiles under a certain energy threshold, which also made them look good in parades.[5]

The Defenders of Man experimented with utilizing cloaking devices on thors in Davis's compound.[6]

"The ultimate expression of terran military might, the Thor is outfitted with enough artillery to take down an army of enemy combatants on its own."

The thor is equipped with different types of heavy weapons,[8] and has enough artillery to take down an entire enemy army by itself.[5] It is armed with four "Thor's Hammer" particle accelerators (two are fired from each arm). Originally, four 250mm strike cannons resided on its back,[8] but these have since been replaced by Punisher[4] cannons. These fire 250mm anti-aircraft shells fitted with advanced electronics to minimize wasted shots. Their depleted uranium cores allow them to punch through the plating of heavily armored aerial targets, causing serious damage. Each shell is individually chambered by a basic auto-loading mechanism that simplifies maintenance and repairs. The cannons' rate of fire is capped to avoid malfunctions and to extend the service life of the ordnance. Bypassing the limit is not recommended, as the cannons may melt or explode.[4]

For aerial opponents, the thor is equipped with Javelin missile launchers.[8] These are located on both sides of the steelglass canopy, and fire four small, IFF fragmentation warheads that can rip through multiple, lightly armored aerial targets on a single salvo. Due to the missiles’ small size, the thor can carry a large payload, ensuring it will be fully prepared to deal with groups of flying bogeys even in drawn-out engagements.[4]

The thor can be optionally outfitted with 330mm barrage cannons.[2]

"If there's one thing we've learned over the years, it's that sometimes you just need someone who likes to smash things."

The thor stemmed from the Terran Dominion Thor Project, a program that resulted in the creation of the Odin.[8] When the thor made its public debut, military analysts were stunned, and embedded UNN reporters described it as "a huge bipedal war machine armed with a dorsal artillery that wouldn't be out of place on a battleship."[9] Thors were being used in the field by 2502.[10][1]

During the Second Great War, the Terran Dominion utilized the thor in defending areas such as New Folsom Prison.[11]

The Odin, a particularly powerful prototype, was developed by 2503.[12][13] A Protectorate shadowguard stole intelligence on the Odin, which was later taken to Valhalla.[12]

After years of fervent exploration, the Umojan Protectorate finally came up with its answer to the thor. Its impressiveness is only matched by the number of Umojan symbols it sports.[5]

Mira's Marauders long sought a thor of their own, but construction routines regularly set them back.[5]

Chief Engineer Rory Swann reverse-engineered a schematic of the thor from examining the Odin prototype.[3] He refined a design that had millions of credits of R&D poured into it. His efforts focused on making it cheaper.[14] The Raiders received their first thors during the attack on the UNN Studios.[3] At the time, he stated that his design still needed some work on the chassis, but had some ideas for upgrades and variants. While still unavoidably expensive for Raynor's Raiders to produce, Swann considered the addition to their arsenal to be worth it.[15]

The Javelin missiles have a 0.5 splash damage radius

The thor can be transported by the Hercules dropship and medivac dropships. One thor fills up the medivac's entire capacity, transforming into a cube-like shape and hanging from underneath.

As of StarCraft II: Heart of the Swarm, the thor can switch between Javelin missiles (which destroy light air units) and Punisher cannons (which are single-target attacks designed to take on powerful air units).

A thor's primary role is to act as the spearhead: a big tough unit that can push past an artillery barrage or fortified positions or push into an enemy base and lead marines into battle.

Its other primary role is to defend allied units from air attacks with its powerful anti-air weaponry. It works well against light air units like mutalisks, but the attack is not as effective against heavily armored air units such as battlecruisers. The thor is one of the only terran units that can withstand a single nuclear missile strike besides battlecruisers. Thors and Vikings is unstoppable against any air power, Thor’s focus down on light air targets while Vikings destroy armored tougher targets.

The thor is countered by range, mobility, and certain anti-armor units. It doesn't deal splash damage to ground units, therefore, it cannot effectively deal with massed units such as marines, zerglings, and zealots. Thors should also avoid marauders, void rays and immortals due to their bonus damage against armored targets.

A popular strategy with the unit is the "thor harass" (sometimes called "thorship"), similar to the reaver harass of StarCraft. It involves pairing the thor with a medivac dropship, combining the thor's power and the mobility of the latter.

Some features that existed on the thor in previous builds led to a concern that its role was overlapping with that of the siege tank. Unlike the siege tank, the thor is an assault unit rather than a siege unit. Its ground attack has much less range than a siege tank's 180 mm cannon, so it is exposed to enemy fire while attacking.[16]

Another difference from the siege tank is that the thor can also function as a ground to air attacker.[17]

Thors, Vikings and siege tanks is also an unstoppable combo using long range to destroy anything that opposes them.

Arms the Thor's Javelin missile launchers, which deal splash damage to nearby air units and additional damage to Light units.

The thor can be unlocked after playing the mission "Media Blitz," and made available after Chief Engineer Rory Swann scanned the schematics of the Odin and made it less expensive to produce.[3]

The thor attacks an enemy ground unit or structure using the cannons on its back. The target unit is stunned for the duration and takes 500 damage. The thor cannot move or attack when using the ability.

This ability was removed in Heart of The Swarm.

Increases the armor of terran vehicles

Thors are exclusive to Rory Swann in Co-op Missions, unlocked once he reaches Level 6.[20]

Tychus Findlay can call down the elite thor progenitor, the Odin, into battle for a limited time. [21]

Arcturus Mengsk has access to an elite Royal Guard thor named the Blackhammer, which specializes at destroying air units and protecting allies around it.[22]

Allows thors to use the 330mm Cannons ability, stunning all units in a small area and dealing 500 damage in a larger area over time.

Allows destroyed thors to be rebuilt in the field when destroyed. The wreckage of the units can be attacked and destroyed. 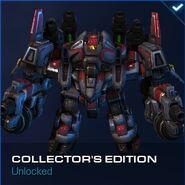 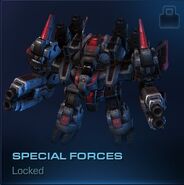 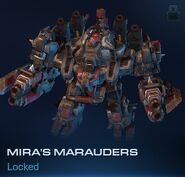 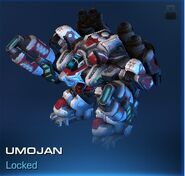 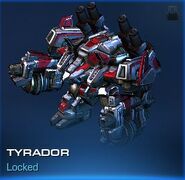 Tyrador thor
Add a photo to this gallery

Tyrador thor portrait
Add a photo to this gallery

Retrieved from "https://starcraft.fandom.com/wiki/Thor?oldid=358591"
Community content is available under CC-BY-SA unless otherwise noted.