The twilight council is a protoss building, which serves as a meeting point for representatives of the Daelaam.

The Tal'darim stole the design of the twilight council, changing its architecture to be more intimidating and somber.[1]

Protoss commanders can research additional upgrades for their units at the twilight council when playing in the Co-op Missions mode of Legacy of the Void.[2] Alarak builds a "death council" instead of a twilight council, a variant of the building with identical stats and position in the tech tree, but with a Tal'darim skin instead of the standard one.

Valorous Inspirator: Increases the Charge's bonus movement speed from 3 to 6

The Zealot spins in place, dealing 10 damage a second to nearby enemy ground units. Can be set to autocast.

Valorous Inspirator Increases the Whirlwind damage from 10 per second to 20 per second.

Intercepts enemy ground units and increases movement speed by 3. Briefly cloaks the Centurion and allows it to move through other units. Can be set to autocast. Passive: Also increases the movement speed of Centurions from 2.75 to 3.

Upon attacking an enemy, the centurion stuns nearby enemies for a brief time. Massive units instead have their attack and movement speeds halved for the duration. Grants 100 shields for 10 seconds.

Energizers can take control of enemy robotic units for a period of time. When control period ends, the enemy unit is destroyed.

Supplicants' shields take less damage from enemy units. (This increases the armor on the shields by +2.)

The slayer instantly teleports a short distance away. The slayer's next attack will deal double damage.

The slayer becomes immune to damage for 2 seconds after taking damage. Cannot occur more than once every 5 seconds

Adept attacks summon an invulnerable Shade that will attack enemies for a short time, dealing 8 (11 vs. light) damage per shot.

The twilight council was initially built as a placeholder tech building to visually signify the tech path chosen by a protoss player. The three diamonds had glyphs which would appear depicting the robotic, high templar or stargate high-end technology. The role overlapped the buildings which already signified those technology unlocks (the stargate, robotics facility and templar archives) so the function was changed so the building unlocks unit abilities instead. As one of the later protoss structures developed in the game, the twilight council features more white surface detail to break up the prodominant gold/teamcolor treatment that had been used on the other protoss structures.[3] 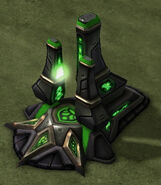 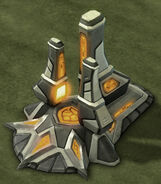 Purifier twilight council
Add a photo to this gallery

Retrieved from "https://starcraft.fandom.com/wiki/Twilight_council?oldid=353555"
Community content is available under CC-BY-SA unless otherwise noted.