Start a Wiki
watch 02:27
The Loop (Games)
Do you like this video?
"Savage. Extreme physical prowess. Essence useful, must acquire."

A single tyrannozor appears in the Heart of the Swarm mission "The Crucible." Killing it gives additional levels to Kerrigan.

Primal ultralisks and Tyrannozors regenerate life quickly when out of combat.

Tyrannozor will leech 20% of damage done as life. 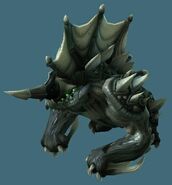 Retrieved from "https://starcraft.fandom.com/wiki/Tyrannozor?oldid=348022"
Community content is available under CC-BY-SA unless otherwise noted.