The ultralisk remains the heavy assault beast for zerg forces. The ultralisk may now burrow, although it takes longer to burrow than smaller zerg units. It is voiced by Glenn Stafford.

Ultralisks deal splash damage which makes them effective against groups of low HP units, such as terran infantry, zerglings and zealots. They are vulnerable to immortals, siege tanks, tempests, void rays, banshees, cyclones that hit and run on ultralisks, brood lords, and the Steady Targeting ability of ghosts. They are immune to stun and mind control effects. The ultralisk is the only zerg unit that can withstand a nuclear missile strike.

Increases Ultralisk speed when off creep from 4.13 to 4.95. The Ultralisk on-creep speed will remain the same at 5.36.

Ultralisks are fast and deal high damage to armored units. Captive ultralisks are featured as a number of destructible doodads. "Piercing the Shroud" has a captive ultralisk: when destroyed it releases broodlings. A similar unselectable ultralisk is found in a hidden place in "Ghost of a Chance." Though it maintains its frenzied attribute it can still be captured using the hive mind emulator.

In the Heart of the Swarm campaign, ultralisks are unlocked upon playing the mission "Phantoms of the Void." The ultralisk can be evolved into either the Noxious or Torrasque strain after the necessary evolution mission is completed.

It is also significantly less powerful offensively compared to the multiplayer version, doing only 25 damage per attack against its main target and 5 damage to secondary targets.

Ultralisk burrows and charges towards target point. On eruption, knocks enemies back and stuns them for 2 seconds. Can be autocast.

Stukov can call down an apocalisk, a massive ultralisk outfitted in thor armor.[2]

Dehaka has the ability to summon primal ultralisks, which can evolve into tyrannozors at Level 11.[3]

Stetmann has the ability to construct mecha ultralisks, which are specialized to take out mechanical ground units.[4]

Mengsk can summon temporary enthralled ultralisks at the cost of Imperial Mandate as part of his Dogs of War calldown.[5]

Ultralisks burrow and quickly move towards target point, stunning enemies for two seconds on eruption. Can be set to autocast.

Ultralisks heal 40% of the damage dealt with their attacks.

Heavy assault beast. Has an area-damage cleave attack. When killed, can be revived after 10 seconds, once every 60 seconds.

A Torrasque skin is available for ultralisks in StarCraft II's multiplayer for players who purchased the digital deluxe or collector's edition of StarCraft II: Heart of the Swarm.[6]

An early render of an ultralisk

Ultralisk variants in in Heart of the Swarm: noxious (right) and torrasque variant (left) 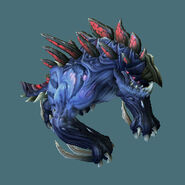 Primal ultralisk in Heart of the Swarm

Primal ultralisk skin in Co-op Missions and Versus

Primal ultralisk portrait in Heart of the Swarm

Primal zerg ultralisk portrait in Co-op Missions and Versus 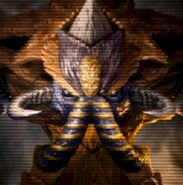