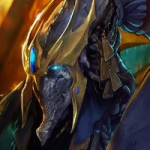 Got your message on FF.net. As you have an account here, and given the subject matter, thought it better to respond here.

Anyway, how a description is applied is more or less on a case by case basis, but there's no reason not to apply them in of themselves, whether it be an epigraph (e.g. the Psi Destroyer - blurb doesn't say much that dialogue covers) or is integrated into the article proper. Based on the examples given, I'll make a few edits, you can more or less get an idea from there. Standard mission refs can cover the info if it's integrated into the article proper.--Hawki (talk) 09:51, April 29, 2015 (UTC)

Thanks. I'll be looking through the campaign and adding some descriptions here and there when appropriate. --Shadow Archon (talk) 14:06, May 1, 2015 (UTC)

Per the talk page, it's more a case by case basis, but spec is generally frowned on. For instance, going by the WS statements, I've phrased it generally (keeping to the facts), but we don't speculate on how that's the case. Similar with the Apocalypse class. By the original manual, they're launched from Tarsonis, which could imply warp drive by itself, or that the planets are in the same star system. We know the latter isn't true anymore, but the bombing of Korhal has been depicted differently in different sources, so in the missile article, it's mentioned that they're launched, and effectively left at that. It isn't the wiki's place to speculate on the how's and why's, but can note discrepancies (e.g. in the Korhal article, the main text is phrase as "Korhal was nuked" (a constant) and the discrepencies of method and casualties noted in its "notes" section. As for sensors, I wouldn't go there. For instance, fact, the UED observed the sector, and as such that fact is included. We have no idea how, so it's not the wiki's place to speculate how, and there's so many unknowns that nothing conclusive can really be attributed to the means.--Hawki (talk) 23:06, May 1, 2015 (UTC)

To my knowledge, no. The tags were set up by wikia staff, but the blog feature was either never implemented, or disabled. A staff member might be able to create it.--Hawki (talk) 09:34, May 5, 2015 (UTC)

Retrieved from "https://starcraft.fandom.com/wiki/User_talk:Shadow_Archon?oldid=215895"
Community content is available under CC-BY-SA unless otherwise noted.