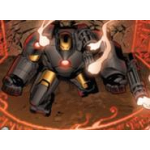 Hi Warmachine. This wiki has a naming policy, in essence, unit names (such as purifier) don't use capital letters, unless they're a vehicle.

Sorry about that,well what other errors I made PSH? Just remind me of the wiki policies because I really don't know to make article links and adding photos on this one. This type of editing is a bit more complicated than other wikias I joined and edited which were easy.

Wiki policies can be found in category: help. Making article links is easy, just put in [[link]], just like any other wiki (except TVTropes, that is). Adding images is hard, and it's supposed to be that way. You should use Special:Upload, although there's an Add Photo button too. Both let you upload an image. You can (and should) name the image something descriptive.

Both methods give you the option to adding text to the image file, and that needs to be done. Add the source at the very least. There's also info that needs to be added about copyrights and categorization, but that's less of an issue, since administrators can add that themselves. PSH aka Kimera 757 (talk) contribs) 01:44, May 28, 2012 (UTC)

Review the nouns usage policy before editing further. Avoid adding hyperbole: they rarely not enhance the tone of presentation. Avoid phrases like "they then": this typically adds only verbosity.

Use the edit summary Edit

From this time forward, use the "Edit Summary" field to justify your edits. Especially the ones where you are tacking on words that add little to clarity or content ("adding verbosity").

The summaries better "make sense". I will be issuing blocks if you do not make those summaries and, further down the line, if your edits do not improve.

The next time I block you will be permanent. Going by the lackluster edits you've been making on other wikis and this one (using sockpuppets and all) I expect this to happen very soon. - Meco (talk, contribs) 22:04, August 3, 2013 (UTC)

Wow! you sound like the tyrannical Emperor Mengsk and I'm the Jim Raynor you threatened to be brought to justice very soon. No offense. And what do mean sockpuppets? I don't know any of them, maybe it's some other random guys who edit as bad as I am. --Warmachine375 (talk) 07:40, August 4, 2013 (UTC)

My statement was not idle speculation.

You have been a problem user (via anon IPs) since before you started using this account on this wiki. Afterward you used anon IPs to evade account blocks, and we would have seen more of this recently had I not taken steps to restrict that. This is on top of over 1.5 years (and counting) of poor quality edits from you. Even worse, this behavior is not isolated to this wiki.

For one who was on as thin ice as you, it was an error to reply with a bald-faced lie. Even one of your characteristic non-replies would have been better.

I had held out a very faint, extremely irrational, hope that we might expect something better from you in the future. I had hoped that that last warning would be sufficient inducement for positive change; this too was a faint and irrational hope given the lack of change despite a slew of encounters you've had with admins in the past (again, looking at other wikis).

Your lie has succeeded in destroying that hope, and removing the last inhibitions I had to issuing the aforementioned perma-block. - Meco (talk, contribs) 20:04, August 5, 2013 (UTC)

Hey! You didn't give me time to reply because the internet is slow in my house! And I didn't lie and I said that there are others out there who edit bad as I am and I'm not the only who does it! Blocking me proves that you are as tyrannical and evil as Mengsk!--Warmachine375 (talk) 02:40, August 6, 2013 (UTC)

It's okay to make articles about mods, but they have to use the Fan templates and there's restrictions about how much info those articles can have. A really large mod should have its own wiki. PSH aka Kimera 757 (talk) contribs) 03:47, July 21, 2012 (UTC)

Also note that mods should only have articles if they've been acknowledged by Blizzard and/or an impartial source.--Hawki (talk) 03:50, July 21, 2012 (UTC)

Sweet! So are there any articles about them now?

Retrieved from "https://starcraft.fandom.com/wiki/User_talk:Warmachine375?oldid=199806"
Community content is available under CC-BY-SA unless otherwise noted.