Edit
watch 03:01
Wiki Targeted (Games)
Do you like this video?
Play Sound
"By acting as a conduit into the psionic matrix, warp prisms function as both mobile troop transport and emergency power source. Though they are fragile, no protoss fleet is complete without them."

The warp prism is a flying protoss robotic machine designed to transport troops and strengthen the warp matrix.

"Say what you will about the medivac's ride, at least they never deconstructed me."

A seamless blend of psionics and robotics, the warp prism is the successor to the shuttle, and outperforms it in every way. Its hull is a conductive framework that can absorb most types of energy[2] by disspating the energy of incoming strikes across the hull.[3] It houses thousands of psionic micro-receptors, which channel the power of the prism's crystal core and project "wings" laced with psionic energies. These wings are incredibly resilient, and serve as the primary navigation sensors of the vessel. An automated vessel, the warp prism is controlled by a robotic mind[2] created through a psionic manufacturing process.[4] Its programming is built into the molecules of an advanced crystal lattice. This "crystal computer"[2] transcends the constraints of space-time, and exists within and beyond itself. This allows it to manipulate matter and energy,[5] with great precision,[2] as well as process near-infinite amounts of data faster than the speed of thought.[5] They are capable of intra-system travel.[6] Though fragile, no protoss fleet is complete without them.[7]

The Tal'darim were able to obtain the warp prism design from the Daelaam by 2504[8] and by 2506, re-purpose it into a larger variant.[9] Arming warp prisms with advanced weaponry is a point of contention among fleet lords, as some prefer to use them simply to deploy warriors onto the battlefield. After the End War, the Daelaam began experimenting on infusing warp prisms with Void energies, creating phase prisms. Purifier warp prisms are able to transfer the AI personalities of various Purifiers between shells, and can enable the transfer to occur anywhere on the battlefield. Ihan-rii warp prisms were designed after a flower that once covered the hillsides of their homeworld.

After the End War, warp prisms with ancient designs were deployed that featured distinctive crystal lattices that would sometimes reflect the neural patterns of the templar they housed.[7]

"Shoot 'em before they finish warping!!"

The protoss use warp prisms in several ways. The primary function of a warp prism is to transport protoss forces on the battlefield. Living and inorganic subjects are transformed into energy, and their unique signature imprinted into the prism's crystal lattice core. On reaching the desired destination the operation is reversed and the stored energy signatures are reconfigured into matter in proximity to the warp prism.[2] By linking to a warp gate, it can quickly teleport warriors to its location.[5] A secondary but no less vital function of the warp prism is to act as a mobile focus for the protoss psionic matrix.[5] Opening a containment field around its power core,[3] once the prism is deployed it can power protoss structures around it. In this configuration warp prisms can be used to temporarily replace destroyed pylons in a colony or enable the rapid establishment of a forward base of operations.[2] Both of these functions are achieved by opening the containment field around its synthetic power source. While phasing, the warp prism diverts all energy away from its systems, becoming completely stationary.[5]

During the One-Day War, the chitha demonstrated the ability to disrupt the warp capabilities of warp prisms.[10]

Can pick up units at a range of 5

The warp prism acts as a transport unit for the protoss in StarCraft II, even capable of transporting large units such as the colossus.

After Legacy of the Void, warp prisms were given the ability to pick up units at a range of 5, enabling them to rescue valuable units from combat.[11]

Warp prisms have a drop animation which doesn't affect gameplay, although it is more vulnerable as it does not automatically move away if attacked.[12]

If a warp prism deploys at the edge of an elevated platform, the pylon matrix will extend to lower elevations, but not higher elevations.

Warp prisms cannot be built in the Legacy of the Void campaign, as transports are never required. A titanic warp prism is the bonus objective of the map "Temple of Unification."[13]

The war prism is available to Alarak in Co-op Missions, built from the robotics facility. It can attack both ground and air units, and transforms faster and projects a larger power field than the normal warp prism available in multiplayer games. Due to Alarak not having the ability to research air upgrades, war prisms automatically start with 3 air attack and 3 air armor researched.

The warp prism started as the phase prism,[14] a Nerazim unit. The design changed to the Khalai style to better fit the gold protoss art style and to avoid being mistaken for a zerg unit.[15] 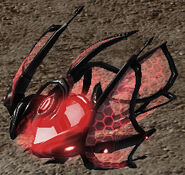 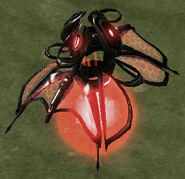 A Tal'darim warp prism deployed as a pylon

The skin description for the Golden Age warp prism mention that they were an ancient Templar design. This contradicts the vessel's history that states it was a successor to the shuttle, which was in service as late as the Brood War.[7]