"When the time for an ambush arrives, remember that the Zerg aren't the only ones who can go underground. The Widow Mine packs a nasty surprise, and is ideal for perimeter defense as well as tactical ambushes."

- A Dominion Armed Forces blurb for the widow mine.(src)

The widow mine is a terran unit introduced in Heart of the Swarm.

A support unit,[1] the widow mine is a quadrapedal device that represents the next step in Dominion automated weaponry.[2] It is just under half as tall as a terran wearing CMC armor.[3] It is controlled remotely, piloted into a contested area and then set to activate when enemy units draw near. Once triggered, the widow mine launches a missile designed to explode in a firestorm of shrapnel, eliminating its primary target as well as any foes that might be nearby.[2] These Sentinel missiles are of short range and pack a fragmentation warhead, that delivers superheated shrapnel to the target and the adjacent area on detonation. The missiles are assembled in an automated manufacturing plant located in the 'thorax' of the unit. After numerous friendly fire incidents, widow mines were outfitted with a powerful friend or foe identification system, which is loosely based on the operative algorithms present in all Crucio smart shells. Initially, the system worked as intended, but it didn't take long for casualty rates to rise once again.

If the widow mine sustains crippling damage to any of its systems, an advanced heuristics recovery algorithm quickly begins the process of determining what’s the best course of action to restore operative efficiency. After executing multiple simulated scenarios, the simple onboard AI reroutes power from affected systems and reprograms the unit’s behavioral patterns to either allow it to complete its mission, or return home for repairs.[4]

The widow mine was inspired by zerg burrowers,[4] and constructed around a modified version of the spider mine pioneered by Victor Kachinsky.[2] Field tests revealed that the burrowing capabilities of the weapon could be improved at a nominal cost. The addition of neosteel carbide tips, and sonic oscillators that allow each leg to vibrate independently at high speeds, significantly reduced burrow times. The enhanced claws have seen much use in "Mine Fighting", a popular (and illegal) sport that pits two of these robots against each other for credits and glory.[4] The design of these mines was further improved on by the research and development of Redell Quinton of Project Blackstone.[6]

Widow mines have been used in diverse scenarios—perimeter defense, tactical ambushes, and political assassinations. An apocryphal record even attests to a single widow mine killing a corrupt colonial magistrate and his entourage of like-minded officials by destroying the dining room they were in.[4] Upgrades in drilling technology later allowed the widow mine to reduce its burrow time by two-thirds, with the implementation of neosteel carbide tips and sonic oscillators.[3]

Under the reign of Valerian Mengsk, technicians were perplexed by the occasional misfires of the past, and added more protective plating to the widow mines to better contain accidents and protect against unintended injuries.

Always fond of robotics, Umojan Protectorate engineers held an exclusive competition to craft the perfect widow mine. They were thrilled to discover the winner was still a student finishing her degree. Their widow mine variant was incorporated into their arsenal.[5]

Dominion marines have been known to pit widow mines against each other in friendly scuffles at the barracks. For the sake of balance, its drilling claws upgrade is disabled for these fights, as well as its missile launcher.[3]

Heart of the Swarm (versus)

Legacy of the Void (versus)
Co-op Missions

Widow mines are a burrowing assault unit in the terran aresnal. While unburrowed they cannot attack, but when burrowed, they can fire a sentinel missile at opponents, dealing splash damage in a massive area. This makes them effective against clumped low health units like mutalisks, or marines. However, the missile takes time to recharge after a use.

Widow mines are cloaked when initially burrowed, but become decloaked while their missile is on cooldown. With the Burrowing Claws upgrade, the widow mine will always remain cloaked while burrowed.

Reduces the time Activate Mine takes to burrow the widow mine from 3 seconds to 1 second.

Reveals the widow mine when on cooldown, unless the player has constructed an armory.

The widow mine burrows, activating the Sentinel Missiles ability. When the player has an armory, the widow mine is cloaked while burrowed.

Widow mines are usable by Mira Han and Matt Horner in Co-op Missions. They can be built from the assault galleon, and can be upgraded to send out five explosions on death.

Reduces Sentinel Missile cooldown by 20 seconds. When Widow Mines are destroyed, they launch 5 Sentinel Missiles at random nearby targets (within a radius of 5.5) that deal 10 (20 vs. Shields) area damage (radius 2.625).

Stronger Death Chance Mastery: When Widow Mines are destroyed, they launch 10 Sentinel Missiles at random nearby targets (within a radius of 5.5) that deal 10 (20 vs. Shields) area damage (radius 2.625) with a 1.5% chance per mastery point.

Chaotic Power Couple: Increases the damage dealt by Sentinel Missiles from destroyed Widow Mines from 10 (20 vs. Shields) to 20 (30 vs. Shields).

Sentinel missile range is increased by 50%, and Widow Mines can burrow and unburrow much faster.

The widow mine was previously a suicide unit.[8][9]

In patch #8, it lost the ability to autoacquire cloaked units.[10]

For Patch 4.0, widow mines were altered to be observable when reloading their sentinel missile, even if still burrowed. This was done to "reduce certain game ending moments" and make cleaning up unattended widow mines easier, while still allowing the widow mine to perform its splash damage role if properly set up with a terran army or used defensively.[11] 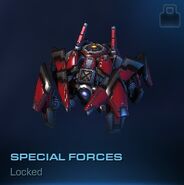 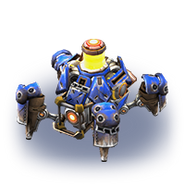 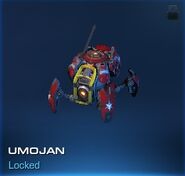 Umojan widow mine portrait
Add a photo to this gallery

Retrieved from "https://starcraft.fandom.com/wiki/Widow_mine?oldid=330779"
Community content is available under CC-BY-SA unless otherwise noted.