StarCraft Wiki
Register
Don't have an account?
Sign In
Advertisement
in: Heroes of the Storm, Xel'naga buildings
English

The xel'naga tower[1] (formerly xel'naga watch tower[2]), also known as an observation post or observatory, is an ancient xel'naga structure.[3][4]

When activated, the observatory illuminates and crafts itself together into a watch tower.[5]

These are usually placed in strategic areas.[4]
A player can quickly tell what an enemy is attacking with, making upcoming battles easier and blunting the effect of rushes.[9]
A player attempting a rush is advised to try to hide rush attacks.[11]

If units from two opposing teams are in control range (2.5) of a watch tower, neither will have control over it.[12]

Watch towers are highlighted on the mini-map with an eye icon, visible as soon as play starts.[13]

Watch towers are selectable structures but have no hit points (like mineral fields and geysers) and have only the "structure" attribute.[2]

The tower was originally a protoss structure conceived by Samwise Didier. It was eventually repurposed into a xel'naga structure.[14]

The watch tower could be occupied by the overlord's Slime ability, neutralizing it.[15][16]
However, this ability was later removed.[17]

Xel'naga towers appear as watchtowers on the "Warhead Junction" map of Heroes of the Storm.[18]

Towers can randomly spawn with a nameplate for the symbol of Axiom Esports, the team of the late TotalBiscuit, and of INcontroLTV, the twitch.tv channel of the late INcontroL. 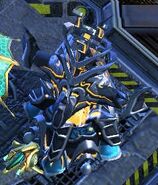 Xel'Naga tower with the symbol of INcontroL

Xe'Naga tower with the symbol of TotalBiscuit

Português do Brasil
Community content is available under CC-BY-SA unless otherwise noted.
Advertisement