Edit
watch 02:52
Roblox: DeepWoken - The Loop
Do you like this video?
Play Sound
"For Sari'jal, the quest for balance is valued above all things; balance within, and balance throughout the universe. Our way is to walk the path of shadow. If it becomes necessary to take a life, all emotion must be put aside. Anger, hatred, vengeance… these imperfections must be burned from a true warrior's spirit. When your spirit is balanced, at the instant of the kill - there is no right or wrong - there is only... the reckoning."

Commander of the Void Seeker

Zangakkar was a elder Nerazim of the Sari'jal Tribe. He was devoted to the Shadow Walk and the ideal of maintaining balance in the universe, and helped Nova Terra defeat Jackson Hauler. He was a master swordsman, able to communicate with his fellow warriors telepathically over long distances. Zangakkar could maintain a permanent state of invisibility, appearing only when he desired to do so.[1]

In early builds of StarCraft: Ghost, Zangakkar watched from the shadows as Jackson Hauler and his spectres wandered the galaxy trying to collect terrazine for his operations. This search led them to Aiur, though Hauler's forces were overtaken by Khalai forces. After ghost agent Nova Terra pushed back the Khalai, Hauler betrayed her and nuked her location. Zangakkar took her back to the Void Seeker, and had her revived in a regen-chamber.

There he explained Hauler's plan and the use of terrazine. He also discovered that terrazine was coursing through Nova, and would kill her in less than 20 hours. He led her to Char, where Hauler had established new mining operations and was holding the Koprulu Liberation Front leader Cole Hickson. Nova freed Hickson, and together Zangakkar and his protoss helped the two raid Hauler's headquarters at Gehenna Station.

In the final confrontation with Hauler, Zangakkar was mortally wounded, but Nova managed to kill Hauler. In his last moments, Zangakkar gave Nova his psi blade, and told her that she had come far, and he hoped she would find peace and balance in the stars.[1] 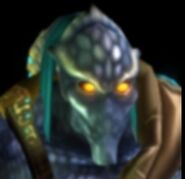