1
"En Taro Adun! All for the Empire. Doom to all who threaten the homeworld!"

Zealots become available to the player in the campaign with the mission "First Strike" in Episode III and "The Evacuation" in Episode IV.

Zealots are the strongest of the basic starting units and are correspondingly more expensive. Being modestly outnumbered by marines or zerglings is not a major cause for concern given the quality of the zealot. Their high hit points and excellent base ground attack with normal-type damage ensure that they are useful until late in the game, and they are arguably the best breakthrough unit due to their low cost and lack of need for micromanagement compared to the unwieldy archons.

Zealots are virtually effective against all sorts of land units especially when supported by dragoons, high templar and air units. They are also capable of destroying structures very quickly. Effective counters to back down zealot-only groups are firebats, mass hydralisks, reavers and any air unit capable of attacking ground forces. Zealots are also fairly vulnerable to faster units such as vultures (being vulnerable to being killed in one salvo from several of them) as well as spider mines.

The zealot was effectively the baseline protoss unit, representing a "non wimpy grey alien, wearing ornate power armor and wielding a wicked set of blades." Protoss units higher up the tech tree could deviate from this base design.[2]

It is voiced by Allen Adham. 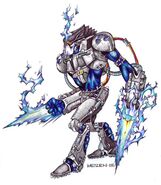 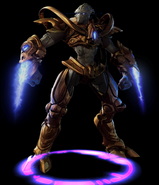 Zealot on the campaign select screen in StarCraft: Remastered